Improving Legal Immigration to the U.S.

Lifting country-of-origin limits on employment-based green cards is a proactive step in U.S. immigration reform. Can it help the U.S. stay competitive in the innovation race? 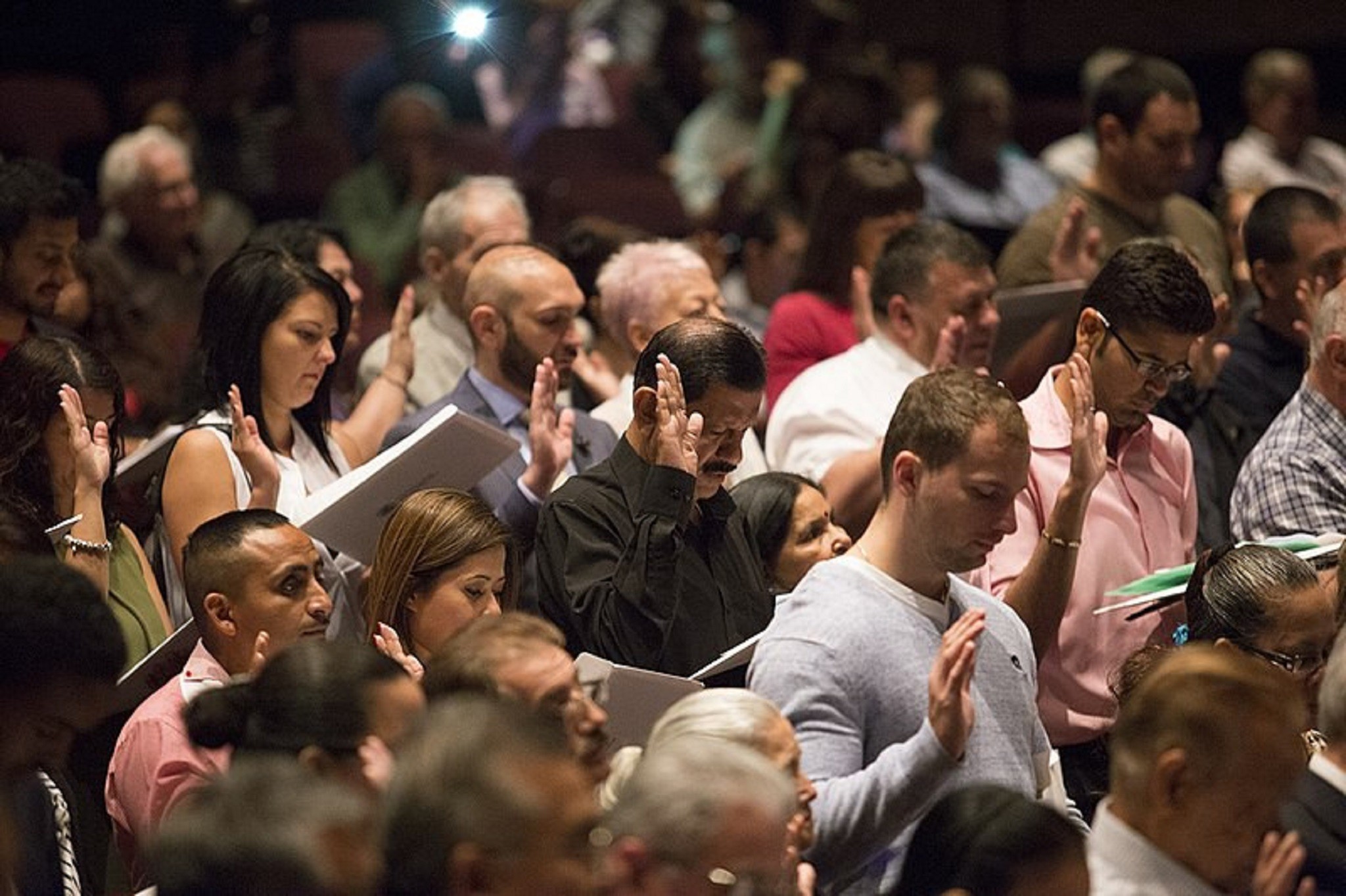 Candidates taking the Oath of Allegiance at a Naturalization Ceremony at College of DuPage. August 15, 2015 (photo: COD Newsroom)

“Imagine somebody who is already here in a backlog for fifteen years. Then imagine a man and a woman in Malaysia who have not even met yet. One day they will meet, one day they will get married, one day there will be a child then that child will go to primary school, high school, then go to college. And then imagine somehow a U.S. employer wants to hire that child … That child, who is not even born yet, will get a green card before somebody who is already in the country for fifteen years.” -Aman Kapoor, co-founder of the nonprofit Immigration Voice

The backlog of Indian green cards has grown to over 300,000 applicants. From China, 65,000 people are waiting. Some are facing decades in wait time. Some are waiting on turns that will never come, unless they live another 150 years. A proposal by Rep. Kevin Yoder (R-KS) is poised to help end the unfair practice of country green card caps.

Country-of-origin limits on employment-based green cards, a measure passed in 1990’s Immigration Act, has had unintended consequences that continue to unfairly penalize the legal immigrant community of skilled tech workers in the U.S.

The House Appropriations Committee has passed Yoder’s proposal, originally the Fairness for High-Skilled Immigrants Act as part of the 2019 Department of Homeland Security spending bill, but it still faces several major hurdles.

Under current rules, an incentive has been created for U.S. companies to exploit highly-skilled tech workers from India; while Indian workers are waiting in decades-long immigration office lines, the green card process is linked to their job titles.

They can’t leave their jobs or even accept a promotion without starting the process all over again and going back to the end of the line. That leaves them severely limited in their ability to negotiate for a raise commensurate with increasing experience or even to keep pace with inflation.

This also creates a perverse incentive for U.S. companies not to hire American workers.

Yoder’s measure to end country-of-origin limits on employment-based green cards is widely supported on both sides of the aisle. It has also received significant endorsements from tech companies like Amazon.com, Alphabet Inc. and Microsoft. The Republican Hindu Coalition and the nonprofit Immigration Voice have also supported the legislation.

The measure, if passed, stands to help the U.S. attract and keep top tech talent from around the globe and stay competitive in the race for new technological advancements and innovations.

The next silicon valley will probably be in China. Why?

Somewhere in the midst of all those people, is the next world-changing idea, the next innovation, the next breakthrough in technology. It will reshape global economies, have vast economic and military significance and create great wealth. Which country will reap the benefit?

Sheer population numbers give China and India an advantage over the U.S. in the innovation race, but other factors make it even more likely that the next Silicon Valley will be in China or India. 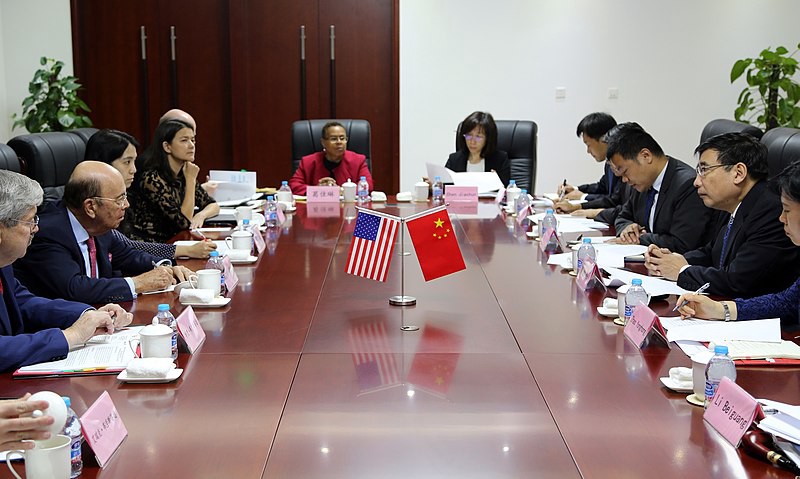 China is already on track to soon outspend the U.S. on technological innovation research and development. This is not a gradual change; China’s annual R&D spending has increased 70.9 percent from 2012. China already devotes more of its innovation budget to actually bringing products to market. Drone technology is a good example; though the technology was invented in the U.S., it was Chinese entrepreneurs who commercialized it and brought it to market.

In many of these areas, China is already overtaking the U.S. In the U.S-China race for quantum dominance, indications are clear that the U.S. is already trailing China in the race for quantum supremacy. China will launch ‘smart’ intercontinental high-speed trains by 2020. 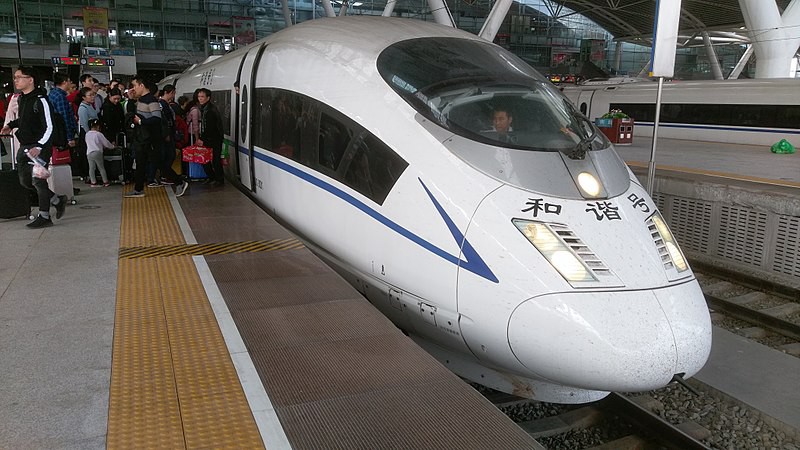 This week, the international science community was rocked by the news that Chinese scientists have used CRISPR/Cas9 to alter a gene related to HIV entry into cells. The first gene-edited babies will be born in China, if they haven’t been already.

The Chinese model for innovation makes it even more critical for the U.S. to attract and keep highly-skilled tech workers from India and China. In the model, state investment is combined with academic transfers of knowledge from abroad; Chinese students are educated in the U.S. and return to work in Chinese labs with the knowledge and skills they’ve acquired.

Unlike the U.S., China is a communist country; the Chinese government owns every innovation, every university research department, every company, every invention. Every breakthrough is the property of the State and, as such, is freely used in military applications. 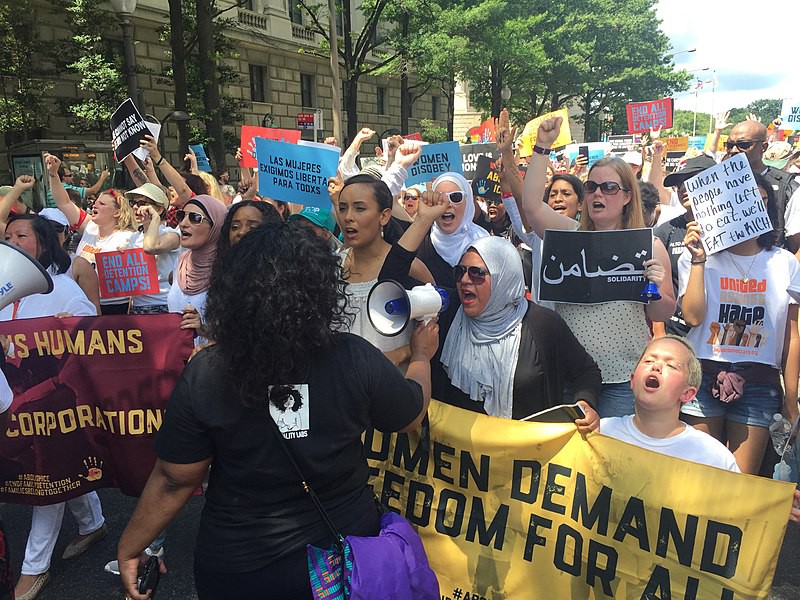 The U.S. does still have a key advantage in the immigration game; people from all over the world want to bring their minds and talents to work and live in America. Nike, Pepsi, MTV, Disney, Baywatch; pop culture has long been the American soft export. Electricity and T.V. helped, too. Innovation, democracy and capitalism are integral to the American Dream: Freedom and invention form a very powerful motivator.

If the U.S. can leverage this unquantifiable incentive to attract key tech and scientific talent and combine it with proactive immigration policies designed to swell the U.S. immigrant community ranks with the innovation leaders of tomorrow, the future of American innovation looks promising. 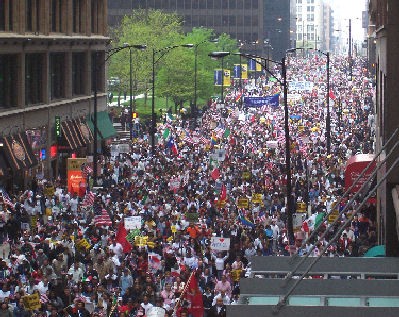 Picture of a rally in Chicago, part of the Great American Boycott and 2006 U.S. immigration reform protests, on May 1, 2006 (photo: Andy Thayer, Chicago Indymedia Center)

Lifting the country-of-origin limits on employment-based green cards is an important step in fixing a U.S. immigration system that has long been in need of course correction.

People wishing to legally immigrate to the U.S., live, work and contribute to the economy should have a reasonable path to do so.

For the U.S. to do otherwise is to create a situation where illegal immigration is likely to flourish while a drain of tech talent cripples American innovation in the decades to come and immigration policy remains a sore spot in the American electorate.