Local authorities and businesses in cities across America are preparing for violence on Election Day. Are they right? 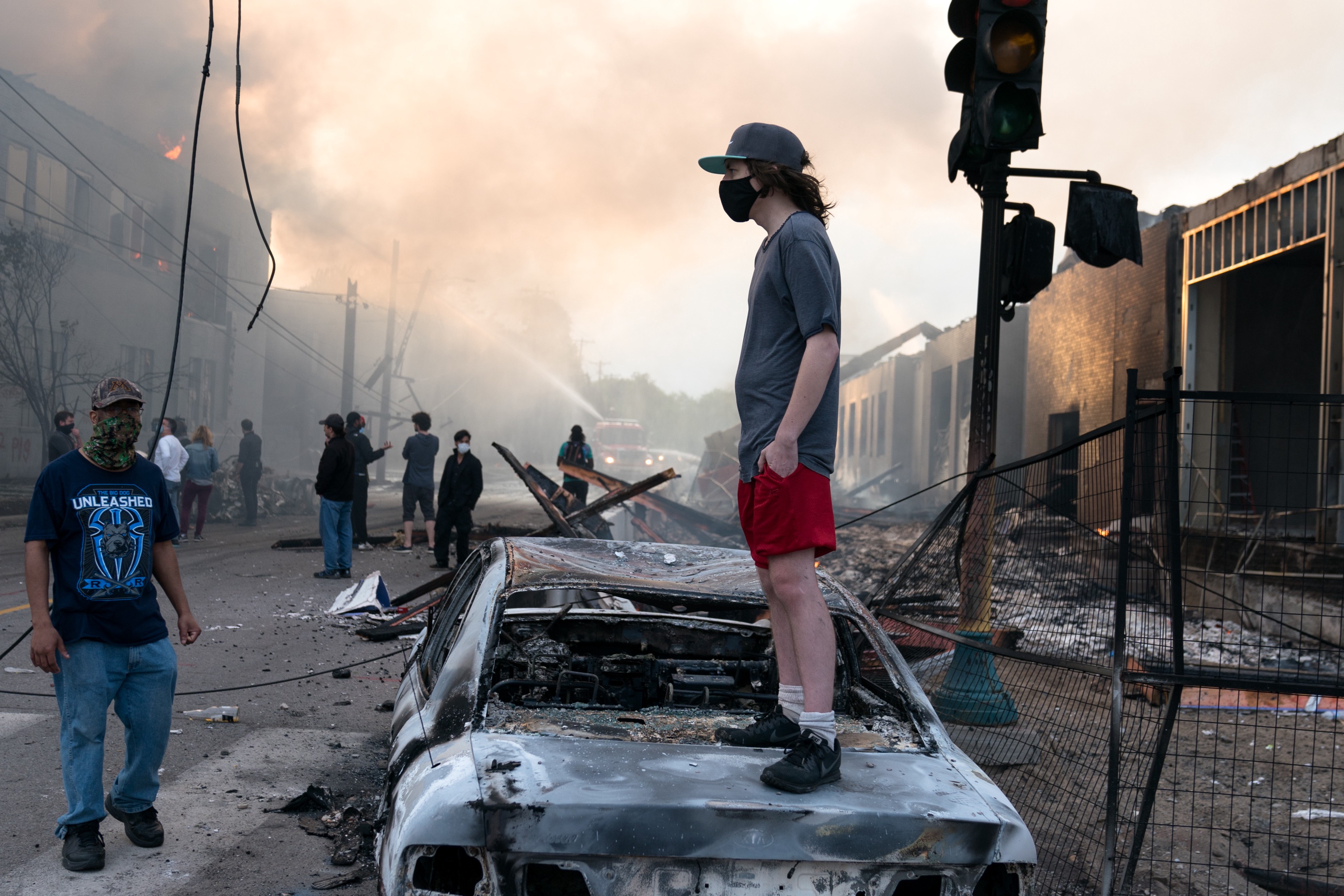 A man stands on a burned out car on Thursday morning as fires burn behind him in the Lake St area of Minneapolis, Minnesota. May 28, 2020. (photo: Lorie Shaull)

As a turbulent election season and year of unusual unrest comes to a close, business owners and local authorities in New York City, Washington D.C., Chicago, Portland and other cities across the U.S. are preparing for mass protests and violent riots.

Business owners in New York City were shocked at the rioting that occurred this summer. The unrest resulted in shattered store-fronts and widespread looting across the city. As Election Day has approached, many high-end stores, including the flagship Nike Store on Fifth Avenue, have been hiring private security or off-duty cops to protect their stores.

NYPD presence will be ramped up, and police commanders have warned merchants and business owners to take any precautions they can to protect their property.

“There is no secret that this election is more contentious than in years’ past,” said New York Police Department’s Chief of Department, Terence Monahan, during a recent press conference covering election preparedness.

Authorities and local residents are hoping preparation will prevent a repeat of the violence and looting which occurred during the protests a few months ago.

In an internal announcement, Police Commissioner Dermont Shea said “this November 3rd will be one of the most highly contested presidential elections in the modern era.”

“Accordingly, we should anticipate and prepare for protests growing in size, frequency, and intensity leading up to the election and likely into the year 2021” he added.

Starting this week, D.C. police have limited leave for officers to ensure enough staffing on Election Day. Local authorities in D.C. have spent $100,000 on riot control munitions, restocking a supply that was depleted during protests over the summer.

D.C. officials say they’re not aware of any credible threats of violence surrounding Election Day but have set up a website for residents to report suspicious voting activities to police.

While D.C. authorities have told residents they do not recommend businesses boarding up their buildings, residents are taking matters into their own hands and boarding them up anyway, bracing for outbreaks of violence and looting similar to those which occurred this summer.

D.C. officials also urged residents to vote over the weekend, before Election Day, because of the potential for Election Day violence.

“Try to vote this weekend,” D.C. Board of Elections Chairman Michael Bennett said. “We don’t know what Monday and Tuesday will look like, especially Tuesday. D.C. is a magnet for all kinds of protests.”

“We also know some people would like to cause mayhem or trouble,” Mayor Muriel Bowser said. “We are preparing to ensure this city’s safety.”

Chicago has seen spurts of civil unrest since the beginning of the protests this summer, including significant looting of Chicago’s downtown shopping district. Officials said residents should expect to see more police officers on the streets, and authorities are working with several city agencies to be prepared for any fallout.

Chicago Police Superintendent David Brown said that police and emergency officials are training to make sure they’re ready “regardless of whatever scenario happens on Election Day.”

“Many cities across the country are doing similar planning,” Brown said at a news conference last week. “We are all in conversations with our counterparts across the country about what we might expect, but everything is uncertain, and so we’re trying as best we can to anticipate any hazard that might happen, including a weather hazard, snow might happen in our city, along with anything related to protests, embedded agitators that might loot or cause violence or destroy property.”

Rich Guidice, executive director of the Office of Emergency Management and Communications, said in a press conference this month “The city is taking an all-hands-on-deck approach to planning for this event.”

“We have been performing drills and holding workshops to be ready to respond to any situation or possible event that should occur in this city before, on or after Election Day,” he continued.

Businesses across Portland are boarding up and/or keeping boards up on their businesses ahead of Tuesday’s election. Like Washington, D.C., Portland police departments have cancelled officers’ leave leading up to Election Day.

On Thursday, Portland Police Chief Chuck Lovell said, “We realize here that this election season could prompt people to be upset or excited about election results.”

“We encourage people to exercise their First Amendment rights, but to do so safely,” Lovell continued. “We realize there may be mass gatherings or things of that nature. We’re supportive of that, but what we want to ask is that people don’t engage in criminal activity or harmful behavior.”

Portland police are coordinating with the Oregon State Police and the Multnomah County Sheriff’s Office in an attempt to keep peace throughout election night and in the following days.

“We have a long history of working together,” Lovell said during a news conference. “We’re working very closely with one another and other partners and elected officials to make sure we have the operational resources on hand.”

“For the state police, we have a statewide mission and our mission is to all agencies and to all people of Oregon,” Davie said. “So if we are called upon to come and assist, then at that time, we’ll know what our command structure looks like, but right now we are in the planning and preparation mode.”

Officials in Texas are also preparing for Election Day violence, especially in places like Austin. In California, the luxe shopping district of Rodeo Drive is already closed to pedestrian and through traffic, and will remain so until well after the election.

Though the polls, and most media outlets, still insist that Joe Biden is about to cruise to victory tomorrow, Democratic cities, and the state and local authorities responsible for keeping the peace in them, seem to be anticipating quite a different result.

The Democratic Party may indeed be hoping for the best, but it is also preparing for the worst. For the people living in these cities, and whose safety and livelihoods are at stake, we can only hope it will be enough.