Impeachment Can Only Succeed With Bipartisan Support

House Democrats do not have bipartisan support. Why have Democrats in leadership decided to move forward anyway? 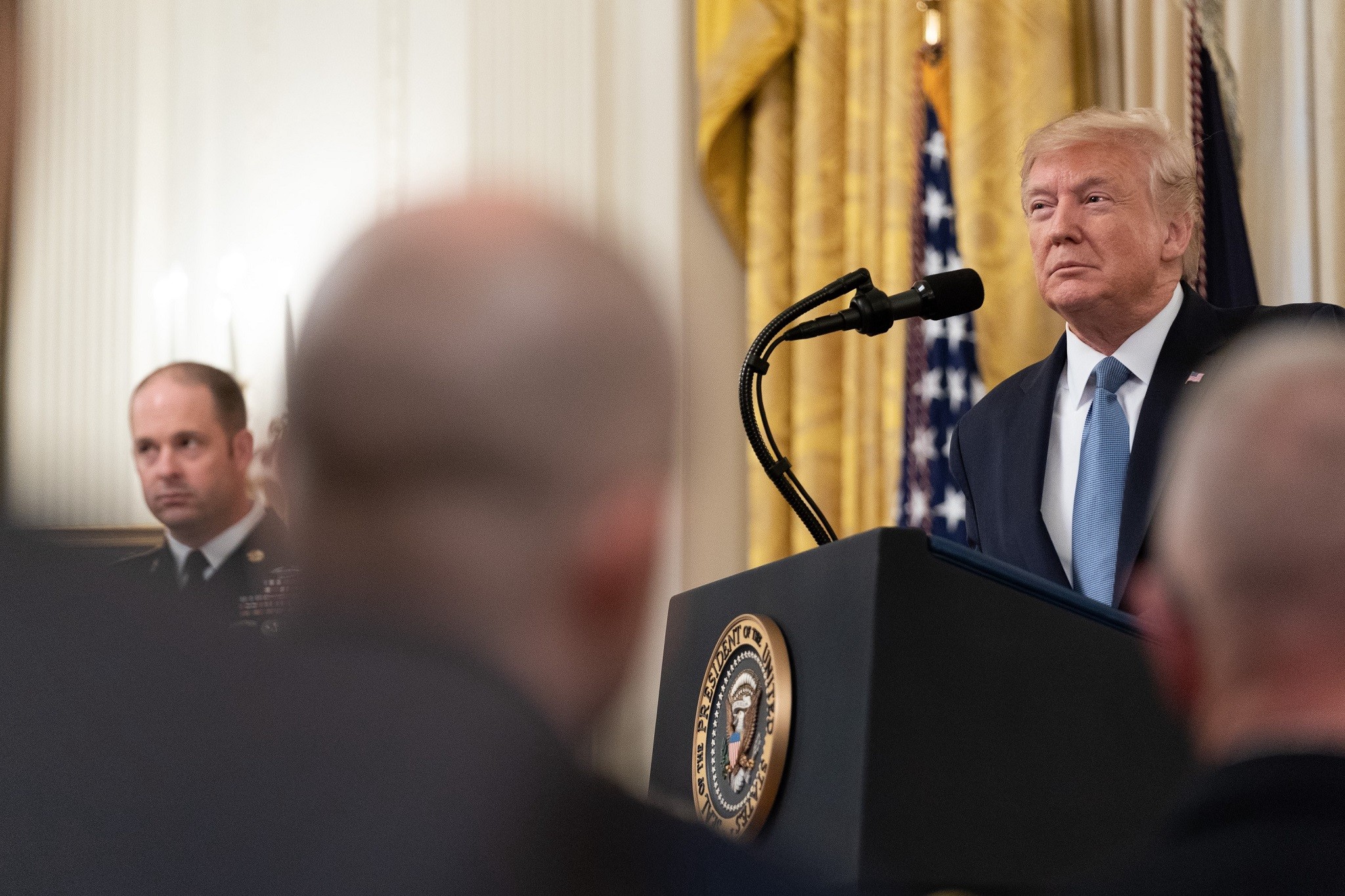 President Donald J. Trump addresses his remarks prior to presenting the Medal of Honor to U.S. Army Master Sgt. Matthew O. Williams Wednesday, Oct. 30, 2019, in the East Room of the White House. Williams is receiving the honor for his actions during the April 2008 Battle of Shok Valley in the Nuristan Province of Afghanistan. (Official White House Photo by Shealah Craighead)

“If the evidence isn’t sufficient to win bipartisan support for this, putting the country through a failed impeachment isn’t a good idea.” — Rep. Adam Schiff

It was Democratic House leadership members themselves who declared, in no uncertain terms and only last month, that any impeachment proceedings against U.S. President Donald Trump needed bipartisan support to move forward.

“Impeachment should not be partisan…You have to be in a situation to undertake impeachment where you believe that once all the evidence is public, not a majority but a good fraction of the opposition voters who supported the president would say, ‘Well, they had to do it. It was the right thing to do.” — Rep. Jerry Nadler. September 18, 2019.

Why have House Democrats delayed this vote for an entire month if not to gather more evidence to convince their Republican colleagues?

That Democrats have failed to do so doesn’t inspire much confidence that the outcome of today’s vote will be to Democratic advantage.

Yet vote they did: House Democrats led by Speaker of the House Nancy Pelosi held together and voted, almost as one, to begin official impeachment proceedings against Donald Trump.

“Impeachment is so divisive to the country that unless there’s something so compelling and overwhelming and bipartisan, I don’t think we should go down that path, because it divides the country. And he’s just not worth it.” — House Speaker Nancy Pelosi

The fact that official impeachment proceedings have been ongoing in various House committees since Trump took office is, apparently, not important.

Then again, it is difficult to believe that this latest Democratic move is predicated on facts rather than partisanship; Democrats haven’t let lack of evidence or facts stop them from trying to impeach Donald Trump thus far.

The vote that took place today was certainly something Republicans have been clamoring for since House Democrats took to secret chambers a month ago and began interviewing witnesses without bipartisan congressional oversight or press coverage.

House Democrats have been on a campaign of strategic leaks ever since, making Donald Trump appear guiltier by the day.

Those of us old enough to remember the Mueller investigation, and the subsequent let down of the Mueller Report, have heard all this before. For well-nigh on three years, the political pundit class breathlessly reported daily death knells of the Trump administration.

Do House Democrats really have the dirt on Trump this time?

“The big difference, Democrats still don’t have what you call ‘the goods’ on this president in terms of breaking the law and being an impeachment target for them.”

“[Democrats are] going to start the process, but they don’t have the same kind of clarity that the people who were opposed to Richard Nixon had because it was so clear that these were criminal acts that he was involved in.” — Tom Brokaw, October 29, 2019, MSNBC

The congressional Republicans who have been allowed by Democrats to attend the closed-door hearings certainly haven’t been much impressed by the strength of the arguments against Trump, obviously.

Critics of the Pelosi-led House Democratic majority consider the timing of such a move. Though the actual impeachment is all but doomed to failure, certainly no more likely to succeed without a single Republican in the House willing to break rank, Pelosi may be trying to appease the vocal left-leaning members of her caucus.

For incumbent House Democrats, the threat of a primary challenge from the left is very real this year.

Young Democratic challengers with the backing of groups like the Justice Democrats- who were responsible for launching the career of Rep. Alexandria Ocasio-Cortez- have a tremendous cash advantage over more moderate Democratic contenders.

Disgraced former-Rep. Katie Hill is one such Democrat test case, where a great deal of money from outside Hill’s California district was invested during the last weeks of her campaign to help her trounce more-experienced counterparts in the primary and wrest an incumbent from office.

Rep. Ocasio-Cortez must be a constant reminder to deeply entrenched Democratic House leadership like Nadler and Pelosi that no incumbent is safe.

By aggressively pushing ahead with impeachment, Pelosi might hope to appease these radicals enough to stave off any more primary challenges than the cash-strapped Democratic Party can handle.

Republicans who refused to support impeachment can always be painted as party-loyalists, too afraid of or compromised by the evils of Donald Trump to do the right thing. With a mainstream media completely willing to report the facts, as Democrats present them, this is sound strategy.

After all, if Democrats found testimony “troubling”, according to the new tenets of U.S. journalism, it must be troubling.

That Democrats, like any other political party, exaggerate, extemporize and hyperbolize the shortcomings of their political opponents over mere disagreements on policy matters that have been bones of contention since the inception of democracy itself, seems to have been utterly lost in the zeal to bring down Donald Trump by any means necessary.

Issues of borders, citizenship, and national security have only recently been recast as uniquely controversial.

Painting Republicans as the problem, versus the strength of the Democratic case against Trump, has some shortcomings however.

Plenty of Republicans hate Donald Trump. Democratic fantasies about “President Pelosi” notwithstanding, there are sure to be Republicans, and probably many of them, who long to serve under a more peaceful and penitent President Mike Pence.

Donald Trump is a difficult head of house, any which way you slice it. He has butted heads with his fellow Republicans, and certainly establishment Republicans, as often as he has lambasted Democrats. A less-Trumpian Trump would win the upcoming election in a landslide, concedes even never-Trumper Matt Drudge.

Especially considering the difficultly House Democrats will have convincing Trump voters, or even independent voters for that matter, that their actions in the House today were entirely for the country, and not at all partisan.

If Republicans haven’t been convinced by the case against Trump, Trump voters aren’t much more likely to be. A Trump electorate subjected to the forcible removal of their duly elected leader would not revolt, but they would certainly show up at the polls good and riled.

What Nancy Pelosi and her House Democrats seem to have done is to force Republicans into a win-win situation; House removes Trump, they win. House fails to remove Trump, they win.

Pelosi’s Democrats on the other hand, seem to have painted themselves into a corner where every option is a loser; if the House fails to remove Trump, vulnerable Democrats in swing districts who went to Trump in 2016 and Democrats in 2018 will have to face a constituency incensed by what will certainly seem a useless dog and pony show.

Seats will be lost. The majority itself might be threatened.

Lest we forget, Democrats must still answer for their last useless dog and pony show; the Mueller investigation. An investigation, voters will not need to be reminded, that did absolutely nothing in terms of hurting Donald Trump.

Unfortunately for Democrats, the Mueller Report may have been just a prelude to yet more disappointment and failure.