“Beirut has never seen anything like this before…It is a destroyed city, people lying on the streets, damage everywhere.” 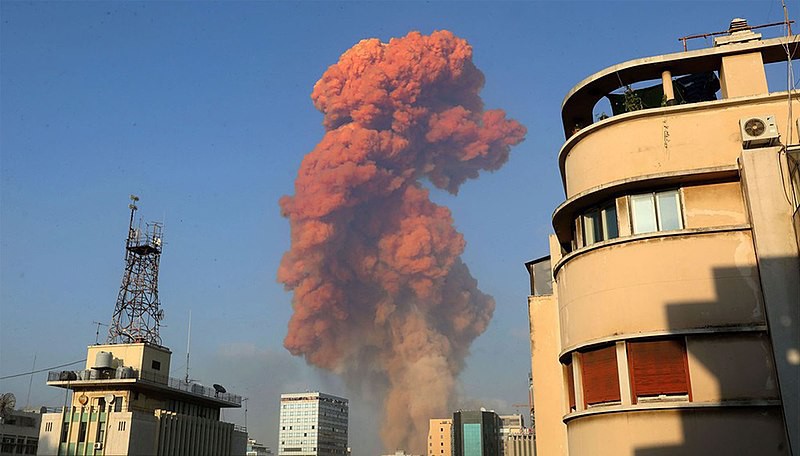 The immediate aftermath of a massive explosion which rocked the Lebanese port city of Beirut on August 4, 2020. (photo: 2001 Online)

Lebanon’s capital Beirut experienced a massive explosion at its main port on Tuesday, injuring a vast number of people and causing widespread damage.

At least 100 people have died and around were 4,000 wounded by the initial blast. The death toll continues to climb as the high number of critically injured people fill local hospitals.

Video footage on social media showed an enormous fire, soon followed by crackling lights and a large explosion. A thick cloud of smoke then erupted into the city, appearing to blanket the area for a few moments.

The Lebanese Red Cross tweeted that over 30 teams were responding at the scene of the blast soon after the explosion. Two hospitals had to be evacuated due to the damage they sustained and many other hospitals in Beirut have been inundated with injured and dying patients.

One hospital in Beirut was so overwhelmed it was turning wounded people away as of yesterday, reported The New York Times.

The massive blast created seismic waves equivalent to a 3.3 magnitude earthquake, according to data collected by the United States Geological Survey. The explosion was heard and felt as far away as Cyprus.

Beirut Governor Marwan Abboud compared the aftermath to a nuclear bomb, telling reporters, “Beirut has never seen anything like this before…It is a destroyed city, people lying on the streets, damage everywhere.”

Videos posted online of the aftermath showed injured people staggering in the streets and severely damaged buildings and homes.

The United Nations Interim Force in Lebanon (UNIFIL) said a ship docked at the port was damaged in the explosion, leaving some personnel wounded and others in critical condition.

U.S. President Donald Trump told reporters at the White House he is ready to assist Lebanon with the explosion’s aftermath.

“The United States stands ready to assist Lebanon. We have a very good relationship with the people of Lebanon, and we will be there to help. It looks like a terrible attack.”

“I’ve met with some of our great generals and they just seem to feel that this was not some kind of manufacturing explosion type of an event. They seem to think it was an attack. It was a bomb of some kind,” Trump added.

The cause of the explosion remains unclear. Lebanese President Michel Aoun called for a state of emergency in Beirut for two weeks and an emergency cabinet meeting on Wednesday.

Early indications point to the possibility that improperly stored explosive materials were the cause of the blast.

Aoun said on Twitter that it was “unacceptable” that 2,750 tons of ammonium nitrate was stored in a warehouse for six years without safety measures and vowed that those responsible would face the “harshest punishments”.

Prime Minister Hassan Diab described the blast as a “major national disaster” and said the warehouse that was the reason for the blast had been in operation since 2014.

“I will not rest until we hold whoever is responsible accountable and punish them with the most severe punishment,” he said. “It’s unacceptable that 2,750 tons of ammonium nitrate have been stored in a container in a depot for the past six years,” he said during a meeting of the Higher Defense Council.

U.S. Secretary of State Mike Pompeo extended the U.S. State Department’s, “deepest condolences to all those affected by the massive explosion at the port of Beirut on August 4. We are monitoring and stand ready to assist the people of Lebanon as they recover from this horrible tragedy.”

This sudden devastation was hurtled at a country already struggling with both the coronavirus pandemic and dire economic challenges.

The explosion occurred during the first of a two-day planned break in Beirut’s COVID-19 lockdowns that the Lebanese government had given its citizens. Afterwards, the government had planned to reinforce a full lockdown with a curfew in order to contain the coronavirus epidemic after a major spike in cases in recent weeks.

The U.S. embassy in Beirut has urged residents in the city to stay indoors and wear masks, warning about reports of toxic gases released by the blast.

The explosion came amid ongoing tensions between the state of Israel and Hezbollah, a terrorist military group on Lebanon’s southern border. The cause is still under investigation, but various intelligence sources havealready indicated that Hezbollah is very much in the limelight.

Sources have long claimed the port is unofficially controlled by Hezbollah. Other terror players in the region could also have played a role.

Israeli and Lebanese government officials have both said Israel, “had nothing to do” with the blast. Israeli officials usually do not comment on “foreign reports.”

In 2018, however, Israeli Prime Minister Benjamin Netanyahu did warn the United Nations and Lebanese officials that Hezbollah was using the port city of Beirut to manufacture missiles and other bombs.

Netanyahu listed the site of the blast specifically as an area for grave concern in 2018. That concern seems well justified.

Whether this devastating explosion was an accident due to negligently stored explosive material seized by Lebanese officials, or something more sinister, the world’s deepest sympathies are with the people of Beirut as they cope with this terrible tragedy.