Has the U.S. Lost its Taste for Warfare?

Has the U.S. Lost its Taste for Warfare? 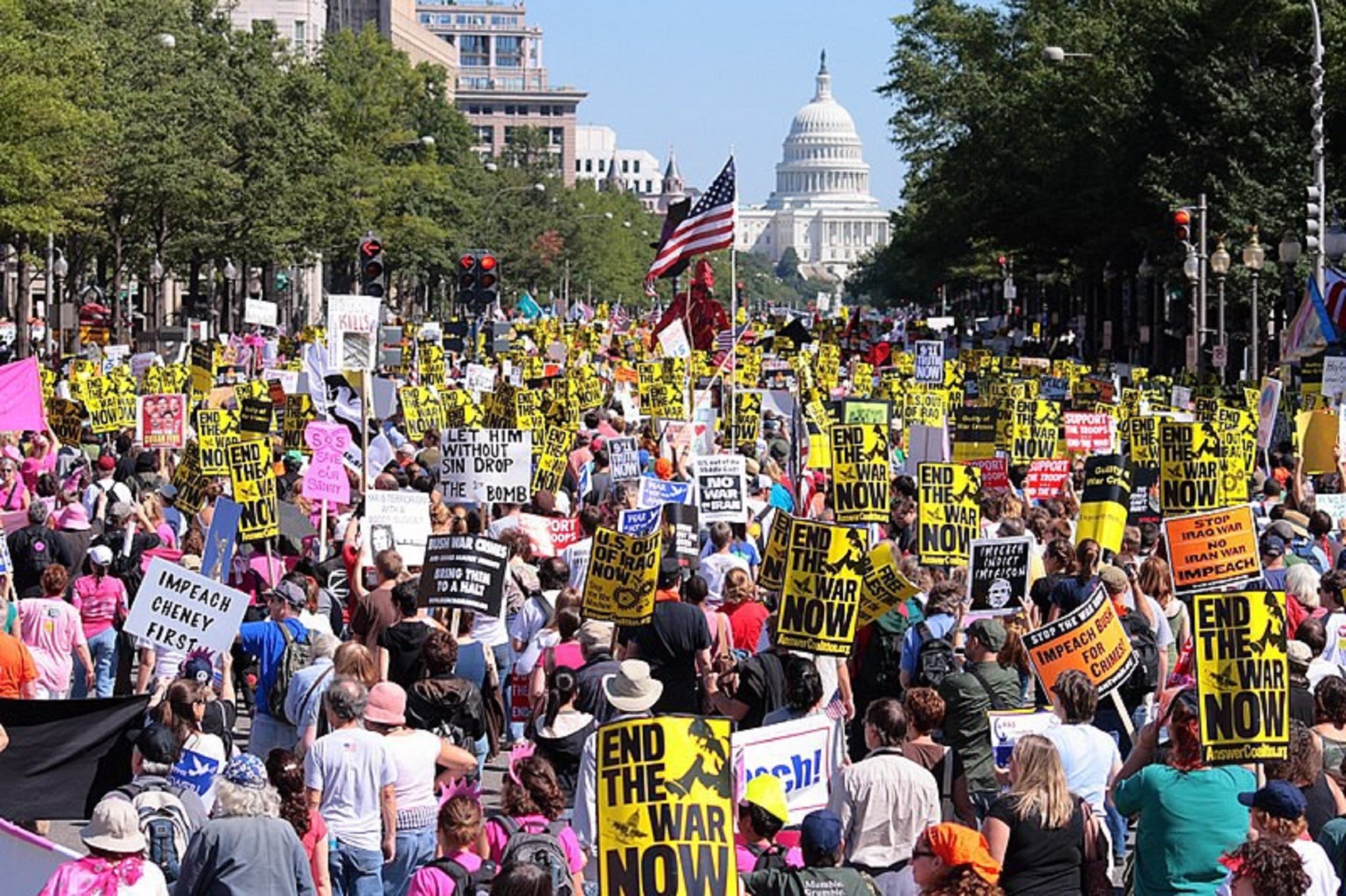 Protesters march down towards the U.S. Capitol in Washington, D.C. (USA), during the September 15, 2007 protest against the Iraq War. An estimated 100,000 people participated in the march. (photo: Ragesoss)

What is it with Americans and war these days? Voters in the U.S. seem to have lost their taste for it and legislators in both political parties aren’t far behind.

Democratic Rep. Ro Khanna (D-CA), a fierce Trump critic, has organized congressional members from both sides of the aisle to call for a bi-partisan coalition to work with Trump to end U.S. involvement in foreign wars.

“There is a wariness of interventionism and militarism overseas in the Congress. You have very thoughtful critics of this on both the Republican and Democratic side.” — Rep. Ro Khanna

“My hope is we’re going to pass for the first time a Yemen War Powers Resolution, in the history of this country, since 1973. It’s going to pass with Republican votes as well, both in the Senate and the House. My hope is that the president will sign it.” — Rep. Ro Khanna

Khanna was even willing to give an interview to Breitbart News, long the scourge of liberal Democrats. Khanna’s message seemed tailored to reach Trump supporters.

“Our biggest competitor in my view is probably China in terms of who’s going to win the 21st century. Is it going to be a free enterprise democracy with America, or is it going to be an authoritarian country like China? China has not been in a war since 1979. They are putting all their resources into building good will with other countries and into developing their airports, their bridges, their universities, their artificial intelligence.”

“Why are we involved in wars that are not winnable that are costing us resources that are strategic in winning the 21st century? Instead of all the trillions of dollars that we have spent on these wars, imagine if we built our infrastructure, if we invested in our people, if we helped build our country to make sure that we win in the 21st century. I think that is a message that every American regardless of whether you voted for President Trump or whether you voted for a Democratic member of Congress can get behind because it’s for the national purpose and when it comes to winning in the 21st century I think we’re all on the same team.” — Rep. Ro Khanna (D-CA)

It is tough to argue with his reasoning, and he makes an excellent point about China; but can Rep. Khanna, a Bernie Sanders campaign co-chair, convince his colleagues and his political opponents to put aside party differences and pursue the urgent cause of peace?

His message certainly seems to resonate well with Democratic audiences.

“You may want to take a look at my speech in Chicago when I introduced him, and the loudest applause I got was when I said ‘when Bernie Sanders is president, there will be no more unconstitutional wars. So, you’re absolutely right — there’s a populist sentiment to get us out of bad wars.” — Rep. Ro Khanna

Whether his message will resonate with high-profile Democrats eager to be seen thwarting Trump’s agenda for campaign purposes, remains to be seen. Whether or not his message gets through to Republican military hawks determined to keep the U.S. Military robust, Khanna certainly is right to try.

Americans are weary of war. And it isn’t hard to see why.

Hyper-Realistic War Violence in the Media

Modern war-weariness is likely due in part to the technicolor, hyper-realistic images of war that have dominated the media landscape in the 21st century.

The good people who produce our movies and video games have certainly done plenty of homework in order to bring us historically accurate visuals of every major armed conflict known to mankind. They have even helpfully theorized future wars we might fight.

Writers, directors, actors and special effects wizards have certainly had no shortage of source material to draw from, either.

Is the reason America has lost its taste for war our certain, once-known never to be unknown, knowledge of the realities of armed conflict and its aftermath?

We know just about everything now.

From the first-hand accounts of survivors after nuclear bombs were dropped on Japanese cities, to recent reports given by people emerging from newly liberated ISIS strongholds. From the Peloponnesian Wars of Ancient Greece to the atrocities of the Khmer Rouge. About war, we have more details than you can stomach.

Humanity has learned a few things about war in the 6,000 years of its written history. The hard way.

In 2019, we know that no war is winnable, because war itself represents a fundamental failure to exercise better options. We know war hurts innocent people in droves. We know war creates more problems than it solves, wrecks economies, drives generational poverty and decimates war-zones for decades.

And we know, for certain, that if violence were capable of solving humanity’s problems, it would have done so long ago.