“You are leaving no legacy to your people of which they would feel proud. They cannot take pride in a recital of cruel deed, however skillfully planned.” 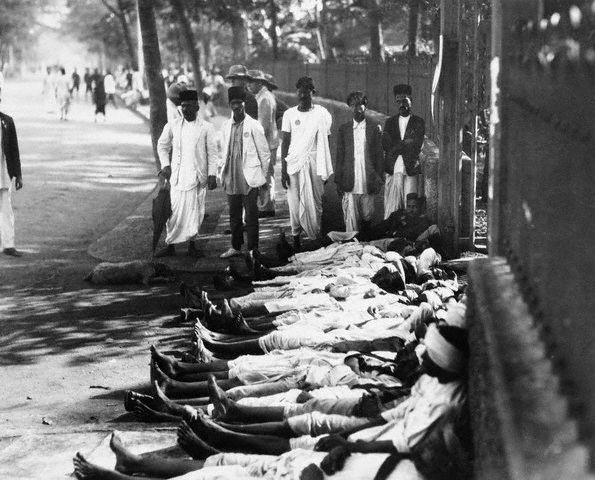 Indian workers on strike in support of Gandhi in 1930. (photo: Public Domain)

“That I address you as a friend is no formality. I own no foes. My business in life has been for the past 33 years to enlist the friendship of the whole of humanity by befriending mankind, irrespective of race, colour or creed.” — Mahatma Gandhi. In a letter to Adolph Hitler. December 24, 1940.

In his letter, Gandhi did not mince words with Hitler: In spite of his friendly opening, Gandhi’s words conveyed strong sentiment and open condemnation of Hitler and his martial aspirations.

“We have no doubt about your bravery or devotion to your fatherland, nor do we believe you are the monster described by your opponents. But your own writings and pronouncements and those of your friends and admirers leave no room for doubt that many of your acts are monstrous and unbecoming of human dignity, especially in the estimation of men like me who believe in universal friendliness.” — Mahatma Gandhi. Letter to Adolph Hitler. December 24, 1940.

But Gandhi’s letter was not intended to insult, nor to challenge; it was a plea for peace and a dire warning against violence. A warning which the German leader headed not. Considering the situation in India in 1939, Gandhi was oddly qualified to speak to Hitler’s problems with the British government.

“But ours is a unique position. We resist British Imperialism no less than Nazism. If there is a difference, it is in degree. One-fifth of the human race has been brought under the British heel by means that will not bear scrutiny.” — Mahatma Gandhi. Letter to Adolph Hitler. December 24, 1940.

Gandhi went on to speak frankly, essentially saying: “Look, we get it; the British Empire and its attendant European allies are terrible in their own way. But if they are indeed as bad as we claim they are, we can never, ever win in a contest of violence and evil; they are inherently more suited to such a challenge, and will always be willing to go further.”

He begged Hitler to reconsider his course of violence, lest he be defeated by it in time.

“We have been trying for the past half a century to throw off the British rule. The movement of independence has been never so strong as now. The most powerful political organization, I mean the Indian National Congress, is trying to achieve this end. We have attained a fair measure of success through non-violent effort.”

“We have found in non-violence a force which, if organized, can without doubt match itself against a combination of the most violent forces in the world. In non-violent technique, as I have said, there is no such thing as defeat. It is all “do or die” without killing or hurting. It can be used practically without money and obviously without the aid of science of destruction which you have brought to such perfection.” — Mahatma Gandhi. Letter to Adolph Hitler. December 24, 1940.

“It is a marvel to me that you do not see that it is nobody’s monopoly. If not the British, some other power will certainly improve upon your method and beat you with your own weapon.”

As indeed happened; a group of world powers used the fine German machinery of war against the German army. And the German people. American scientists beat the Nazi’s to the atom bomb, and used it. Twice.

India, led by Gandhi and using nonviolence eventually triumphed over British rule. India is today a free country; a sovereign nation, Democratically led by its own people.

Gandhi’s India has grown to become the largest Democracy in the world. The Indian government has lifted hundreds of millions of people out of poverty in the past few decades. Today, India is poised today to become even more powerful on the world stage, an economic powerhouse and a model of good government.

Adolf Hitler’s third reich, using violence, has been utterly scourged from the face of the earth. It did not improve the lives of the German people. All its leaders were killed or captured; some took their own lives, others were tried and convicted. Most died for their crimes.

Some were never caught, of course; but their lives could hardly have been peaceful, living in hiding, awaiting the day world authorities would come knocking. Because they did come knocking.

For many Nazi war criminals, there was no safe hiding place. To this day, decades after the conclusion of WWII, former German officers in Hilter’s government are still being hunted down to face belated justice for their crimes. As is only proper; Martin Luther King Jr. and others have observed that while the moral arc of the universe is almost unbearably long, in the end it does bend toward justice.

They say that time will tell. On this subject, time has told: Gandhi was right; Hitler was wrong.

It is an important lesson for anyone concerned about justice in our turbulent times; a useful reflection in any age, by anyone considering the alternate methods of violence and nonviolence; anyone thinking unrighteous means can be justified by a righteous end.

Violence represents a failure of other methods of human conflict resolution; war represents the ultimate failure of all such methods. Violence creates nothing but violence; it does not leave peace or justice in its wake.