Social death by a thousand media cuts is the modern method of human sacrifice, but the reason remains the same: “Go(o)d told me to kill you.” 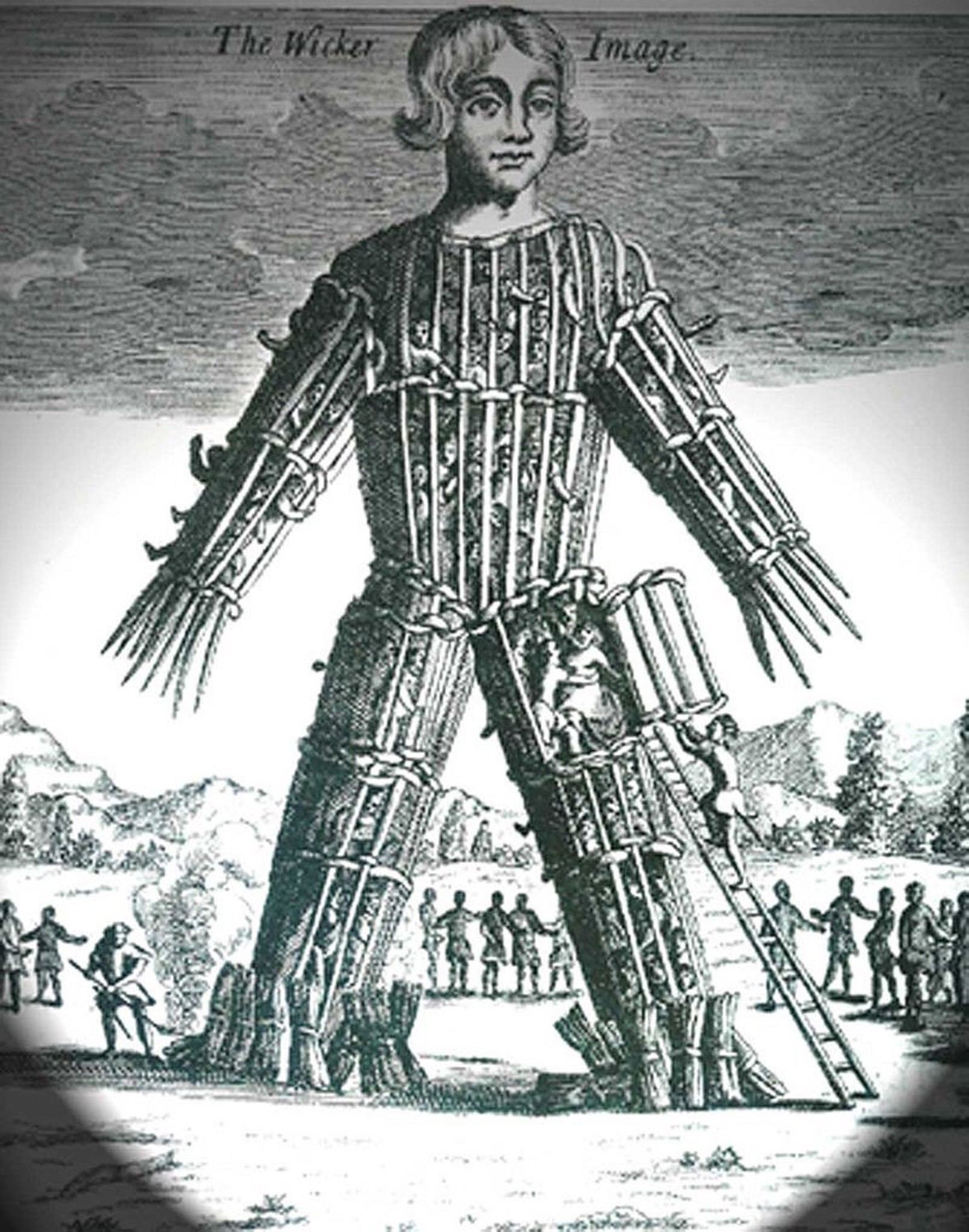 A “Wicker-Man” engraving believed to be from the 18th century. A wicker man was a large wicker statue reportedly used by the ancient Druids (priests of Celtic paganism) for sacrifice by burning it in effigy. (photo: public domain)

An angry mob of liberal Democrats burned a kid this week for the same reason ancient sailors on a becalmed sea might have sacrificed one of their fellows to bring back the winds.

It was not unlike a mob of superstitious villagers coming with knives for a kid unlucky enough to be born an albino. We need your parts for a magic spell, kid, but it’s for a powerfully good spell.

It was not unlike sacrificing a child for rain, or for a good harvest, or for any other nonsensical, illogical, otherworldly reason mankind has dreamt up since the beginning of time, which all boil down to the same thing:

“God Told Me To Kill You”

Have any more terrifying words been spoken in the history of all the world?

What makes them so scary is that someone who believes them is capable of anything. They can justify any act, no matter how atrocious.

Even violence; for they will believe that violence in service to a righteous cause, done for a higher and more powerful good, is more important than whatever means it took to attain it.

It doesn’t have to be God, either; the Greater Good motivates just as well.

In a question of good versus evil, a person believing themselves to be on the side of good can justify anything. Violence becomes a moral imperative.

This is what the movies left out about the bad guys; they think they are really the good guys. They don’t sit around all day in subterranean lairs contemplating their own vileness and feeding people to sharks.

They believe, truly in their hearts, even if it makes no sense to anyone else, that what they do is right; they have their reasons. Good reasons. Some people come to see the error of their ways in time; some never do.

Some people sitting even now on death row for multiple murders have found a way to justify to themselves, to their own satisfaction, that the things they did were necessary and- to them- right. Some are so good at this, they can convince others: The infamous serial killer and rapist known as the “Night Stalker,” is so popular a pen pal, he has his own letterhead.

Even those guilty of crimes against humanity still think that, given the circumstances, they had no choice and are still relatively ok, as humans go. The justifications may be breathtakingly convoluted or stunningly simple; it doesn’t matter to them. They buy it.

“If I hadn’t done it, someone else would have and they would have been way worse than me.”

You must admit, it is logical in a sinister way. And you can see how far you could get with this. You can see how a mind desperate to justify reprehensible actions would seize upon it. And they do.

Everyone uses this one: From the world’s worst narco-terrorist to the average unscrupulous plastic surgeon preying on a patient who has had too many surgeries already- someone who needs a gentler type of doctor who isn’t willing to knife them ‘for their own good.’

It is this kind of false logic that leads to great suffering in the world. Even people who commit crimes against humanity routinely use it.

Here is another common one:

“We Only Killed the Bad People.”

‘We Only Killed the Bad People’: 2 Khmer Rouge Leaders were recently convicted for crimes against humanity and genocide. The Khmer Rouge, led by Pol-Pot’s brutal communist regime, killed 2-million people from 1975 to 1979 in an orchestrated genocide.

The two men convicted, now 92 and 87, were high-level; second-in-command to Pol-Pot himself and the former head of state respectively. The court found both men guilty of murder, extermination, enslavement, deportation, imprisonment, torture, persecution on religious, racial and political grounds, enforced disappearances and mass rape through the state policy of forced marriages.

How did the defendants answer the charges?

“We only killed the bad people.”

They still believe that. Their other justifications during trial included blaming ‘treacherous subordinates’, claiming ignorance, invoking the statute of limitations, using age and ill-health to avoid punishment, saying they had no choice and blaming the circumstances.

Believing you are engaging in any act of violence for the greater good, for God, for a higher purpose, for your country, for rain, for a good harvest, for freedom, for social justice; is all the same thing.

Add one more element, and you get a formula for a man-made disaster that haunts humanity time and time again.

Adding a foe, a foil, an enemy to the justification equation takes something dangerous and makes it truly murderous, giving humanity the hydrogen bomb of justifications for violence.

Believing you are engaging in a an act of violence:

For the greater good… against the forces of evil; for God… against the agents of Satan; for a higher purpose… against those who would seek to tear it down; for your country… against an invader; for rain… to end a killing drought; for a good harvest so the village doesn’t starve; for freedom against oppression; for social justice against white supremacy.

All the same thing. All problematic for a number of very important reasons.

IT WON’T WORK: IT NEVER DOES

Thinking that if we can only kill or get rid of enough people- the right people, the bad people- then, we can have peace, isn’t new. It isn’t progressive; it’s flat-earth regressive. It’s bloodletting and treating-the-weapon-that-wounded-to heal-the-wound old, outmoded, debunked, defunct.

Not to mention dangerous and disastrous for society. It’s the guillotine, with the Good of Society standing in for for will of a supernatural God.

“If we kill or banish these people, oh Greater Good, we beg you, end our struggles and give us peace. Oh, Social Justice, if we grant you the lives and future livelihoods of these racist kids, we beg that you will end injustice in America.”

Superstitious nonsense. Human sacrifice. Go throw someone into a volcano, why don’t you, for all the good it might do. It’s a rabbit’s foot to rub. Salt to throw over your shoulder.

I’m not saying it won’t work, I’m saying you should ask Santa Claus about it.

It never works for a simple reason.

You Can’t Get There From Here

You can’t kill something back to life. You can’t stop killing by killing. You can’t use evil to rid the world of evil. You can’t war your way to peace.

If this strategy worked, it would have worked a long time ago. It’s been tried.

It never works because enough brutality doesn’t eventually give you softness; only more brutality. You can’t wrong your way to rightness. It’s a simple case of ‘you just can’t get there from here’.

Because you’re going the wrong way.

The poor MAGA hat kid is not responsible for the ills in society. He didn’t stop the winds from blowing or wreck the harvest.

Stringing him like like a white bull without blemish and offering him to appease the gods of racial justice won’t bring anyone peace.

He isn’t bad luck. He isn’t possessed of an evil force. He isn’t a witch.

He is just a child facing a mob of angry villagers wielding torches and pitchforks who would rather burn an erring child than raise him.