In her own words this time: Melania Trump’s speech to the RNC was filled with compassion and calls for unity. 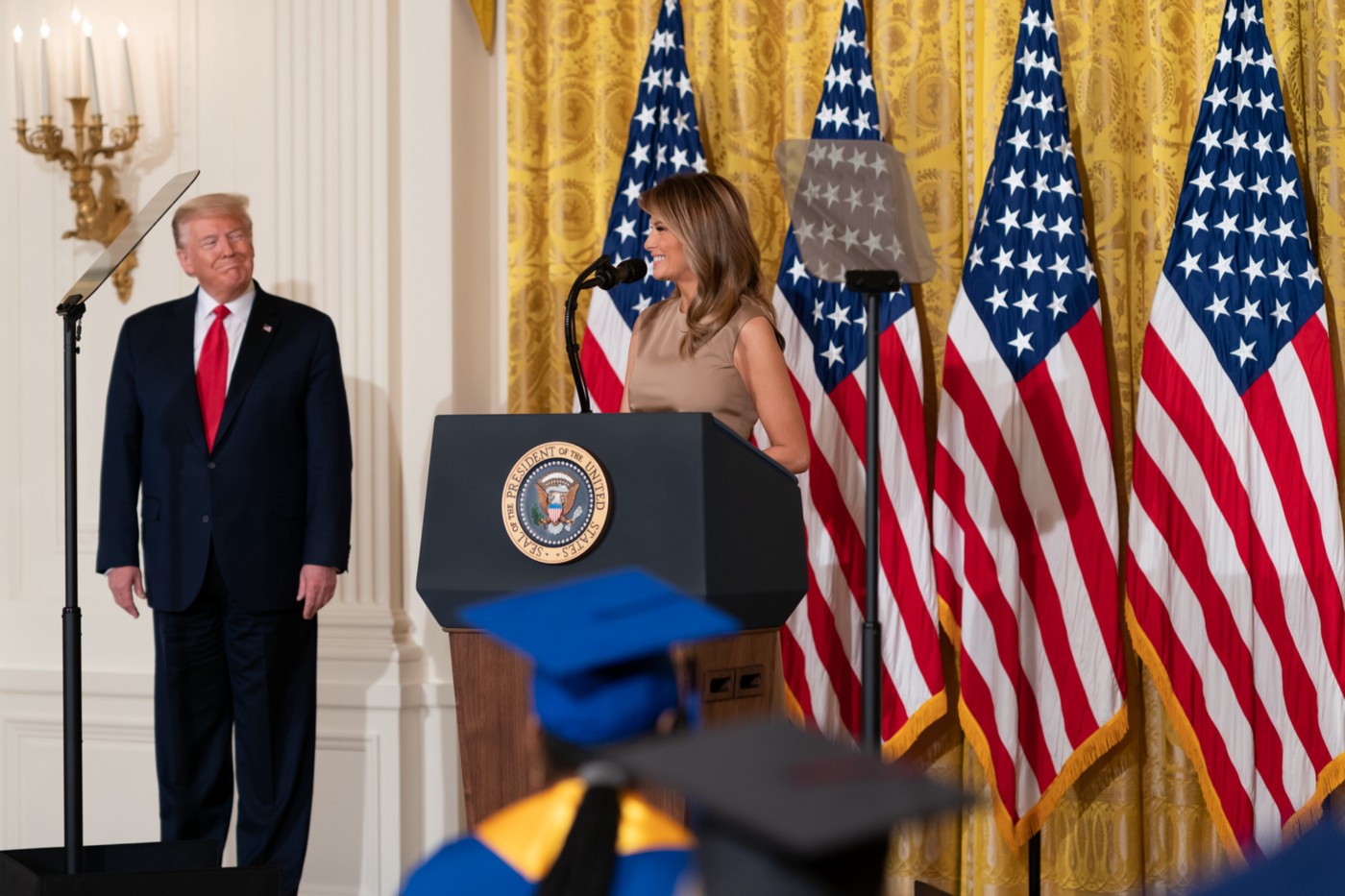 First Lady Melania Trump closed the second night of the Republican National Convention on Tuesday from the Rose Garden at the White House, where she expressed her pride and gratitude in being an American and her support for President Trump’s reelection.

The First Lady said she had reflected on the “racial unrest in our country.”

“It is a harsh reality that we are not proud of parts of our history. I encourage people to focus on our future while still learning from our past.” She urged others to come together, “in a civil manner, so we can work and live up to our standard of American ideals.”

“Instead of tearing things down, let’s reflect on our mistakes,” Mrs. Trump said; “Be proud of our evolution and look to our way forward. Every day, let us remember that we are one nation under God, and we need to cherish one another.”

Melania Trump offered her condolences for every American impacted by the COVID-19 pandemic.

“I want to acknowledge the fact that since March our lives changed drastically. The invisible enemy COVID-19 swept across our beautiful country and impacted all of us. My deepest sympathy goes out to everyone who has lost a loved one, and my prayers are with those who are ill or suffering,” she said during her speech.

“I know many people are anxious. Some feel helpless. I want you to know you’re not alone. My husband’s administration will not stop fighting until there is an effective treatment or vaccine available to everyone. Donald will not rest until he has done all he can to take care of everyone impacted by this terrible pandemic.”

The first lady recalled her experience growing up in a communist Yugoslavia Slovenia and the dreams she held of going to America.

“Growing up as a young child in Slovenia, which was under communist rule at the time, I always heard about an amazing place called America — a land that stood for freedom and opportunity. As I grew older, it became my goal to move to the United States and follow my dream of working in the fashion industry,” she said. “My parents worked very hard to ensure our family could not only live and prosper in America, but also contribute to a nation that allows for people to arrive with a dream and make it reality.”

One of the proudest moments of Trump’s life, she said, was fulfilling her own American dream as an immigrant and independent woman. Since becoming a citizen of America in 2006, Trump said she has been fortunate to see, “the American dream come true over and over again,” and met so many “inspiring women, children, parents and families who have overcome life-changing issues that include addiction, homelessness, family members who are ill or have passed away, abuse of all kinds and many other challenges that would make most people give up.”

Melania spoke of her “Be Best” initiative throughout the speech. “Be Best” focuses on children, anti-bullying, and educating young people about the importance of maintaining their mental and physical well-being. The Be Best initiative highlights important programs and organizations that work to understand online safety and the dangers of opioid and drug abuse.

In her speech to the RNC, the First Lady pressed how “helping children is not a political goal; it is our moral imperative.”

Trump also begged the national news media to do a better job of talking about mental illness and the opioid epidemic. Only through talking openly about it, argued the First Lady, can we end the stigma associated with mental illness and drug addiction that so often prevents people from seeking the help they so desperately need.

As a proud American immigrant with a beautiful story, Melania Trump’s speech was received well by many, including the staunchest critics of President Donald Trump, but not by everyone.

Entertainer Bette Midler was slammed on social media after mocking Melania Trump’s accent during the first lady’s RNC speech and for referring to her as an “illegal alien.”

“#beBest is back! A UGE bore! She can speak several words in a few languages. Get that illegal alien off the stage!” Midler tweeted.

Melania Trump immigrated from Yugoslavia to the United States, with her first language being Slovenian. She also speaks four other languages: English, French, German and Italian. Melania has received extreme criticisms from some voices on the left for her strong accent and for being an immigrant, qualities that should always be celebrated in the United States.

Midler was immediately branded a ‘racist’ and ‘xenophobe’ from both critics and supporters of President Trump.

Radio and podcast host Dana Loesch slammed the actress on Twitter, writing “Xenophobe who speaks one language mocks immigrant who can speak five.”

“The party of diversity mocks an American for her accent,” tweeted Actor James Woods.

Even Trump’s fiercest critics said Melania’s accent was not a ‘legitimate reason’ to criticize the First Lady.

CNN’s Kyle Feldscher replied to Midler on Twitter saying that “One would think that someone who has performed in front of crowds her entire career would be impressed with someone making a speech to millions of people in a tongue that is not her first language.” Feldscher referred to Midler’s take on Melania Trump’s accent as “pathetic.”

“Tweets like this are not acceptable. You can debate the substance without attacking the person,” tweeted Stephen Sanchez, editor at CBS News.

After harsh backlash, Midler apologized on Twitter saying, “Well, all hell has broken loose because I said Melania “still can’t speak English” last night. I was wrong to make fun of her accent. America is made up people who speak with all kinds of accents, and they are all welcomed always.”

“It is a destruction of our history, something no other First Lady would have had the gall to do,” Eichenwald tweeted. “This is the first time I have been furious that @FLOTUS is a foreigner. She has no right to wreck our history.”

Eichenwald later deleted the tweet and issued an apology.

Incidentally, the Rose Garden renovation which so incensed Mr. Eichenwald, though not well-received on the left, was in fact a restoration to the Kennedy administration’s original 1962 plans for the Rose Garden.

The distinctive tulips and crabapple trees which had come to reside in the Rose Garden over the successive administrations, while beautiful, were never intended for the White House “Rose Garden”. As part of the restoration, the tulips and trees were relocated elsewhere on the White House grounds.