Fake News is for Everyone

Why you should be reading fake news right now. 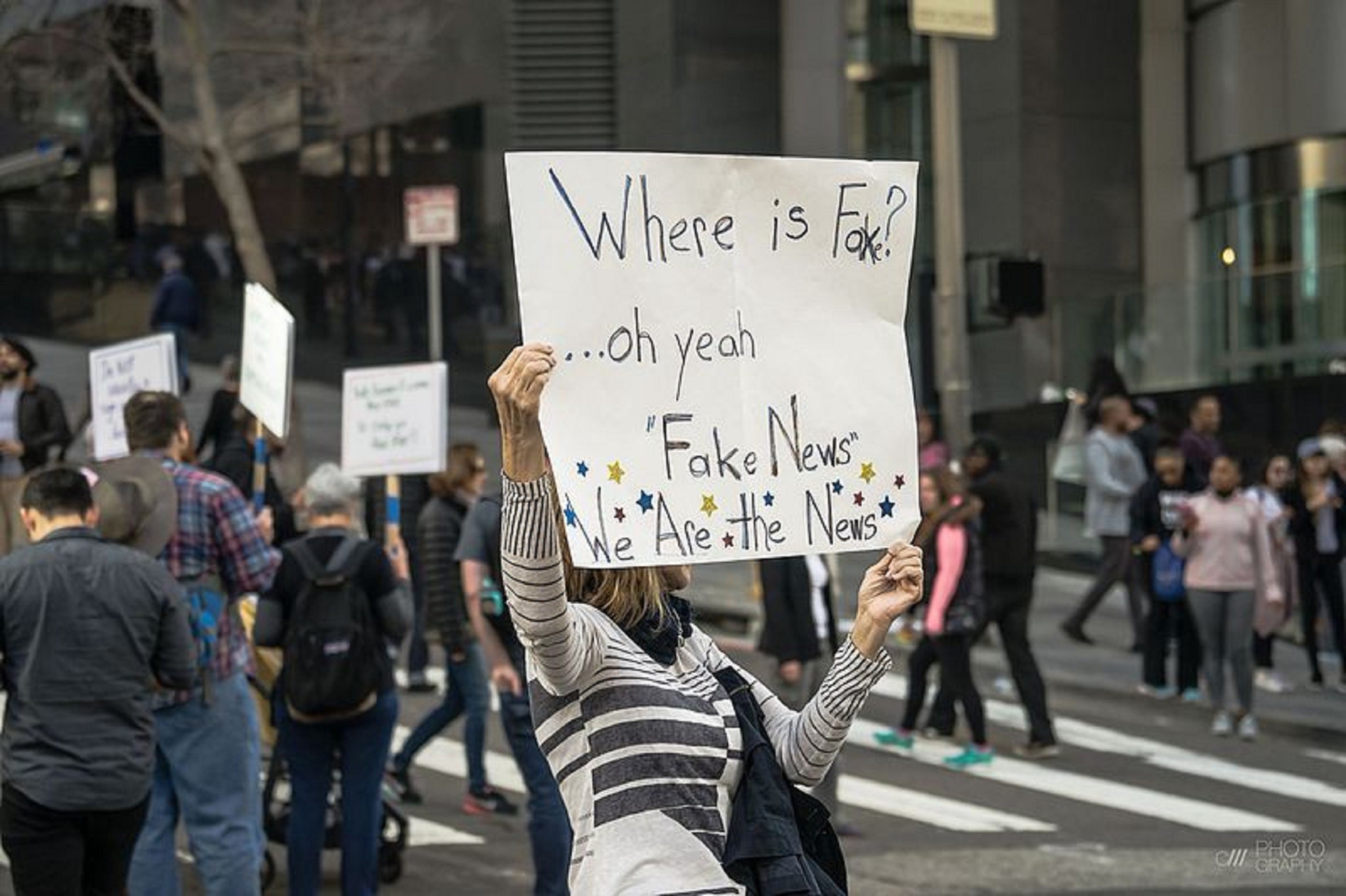 A demonstrator at the 2017 Los Angeles Women’s March. (photo: Cody Williams from Los 4ngeles//C4, US)

“It is everyone’s obligation, whatever your political views, to look at both liberal and conservative news sources every single day. You need a full range of viewpoints to understand what is going on in the world.” -Camille Paglia, Salon

When it comes to the news, bias is unavoidable.

Seminary cultural critic, noted liberal and agent provocateur Camille Paglia starts her news-day with the Drudge Report. As do I. As does CNN.

Next is the New York Post, the New York Times, and the Washington Post online followed by opposing British outlets, The Guardian and The Telegraph. She is also a user of the Google News keyword search function.

“I think it’s an absolute civic obligation for people to at least briefly review the full political spectrum of viewpoints on any major issue.” -Camille Paglia

That was back in the good old days of 2015. Now, even the google news keyword search function can’t be entirely trusted.

On the verge of 2019 Paglia and the rest of us desperate to wrap our brains around “just the facts’ have to go a bit further, endure more journalistic moralizing than ever before and dig deep through a veritable morass of personal distaste for Donald Trump.

Like Paglia, I start with and admire the Drudge Report and have since it’s inception. Matt Drudge is also to be admired, if only for his uncanny ability to stay out of the media spotlight himself.

Of course, Drudge is only an aggregator; he doesn’t report a single word of the news himself. And because he writes none of the stories he links to his site, he can’t inject any sort of personal bias or agenda there, even unconsciously.

But Drudge is a curator. Knowing this, I can’t get my news exclusively from Drudge unless I want to think just like Drudge, and collect only the things that interest him and his organization.

From an almost unfathomably large and diverse news vista, the stories Drudge elects to carry represent a certain viewpoint: His. How not?

Anyone reading the Drudge Report as long as Camille Paglia could likely answer a questionnaire about the personal and political leanings of Matt Drudge with a great degree of accuracy.

There must be a hundred thousand news stories published every day; drudgereport.com links 50. Which 50? The 50 Matt Drudge thinks you need to know about; not to be confused with the 50 you do need to know about.

Read Drudge, but then read Huffington. Read Breitbart, then Motherjones. Definitely read Reuters because Reuters is the C-SPAN of online news.

Is it Time to Diversify Your News?

How to tell: Are you just absolutely, blindingly, mind-numbingly furious and convinced the U.S. is going to implode in on itself at any moment?

During the Obama administration, conservatives were outraged about something new every day: Obama is coming for our guns! Obama is giving away free cell phones I have to pay for! This is THE most liberal/socialist/ communist Presidential Administration this Nation has ever seen!

If you say any of these things to a dyed-in-the-wool conservative Republican today, they will still stubbornly insist, “Well, it was true.”

Except it wasn’t. That is, unless you were only getting your news in those days from conservative-leaning outlets desperate to keep your eyes on the page as long as possible.

That media outlet told you what you wanted to hear as if it’s ad revenue depended on it.

Because it did. It still does.

Look for factors that mitigate your rage. Consider the opposing viewpoint to at least understand what motivates it, you don’t have to agree.

If Kavanaugh made you want to tear out your hair and wear sackcloth for a week, weigh this in the balance: Kavanaugh sides with liberals in Planned Parenthood case.

If your news outlets never tell you anything you don’t want to hear, you need new ones.

If you hate Donald Trump with the fire of a thousand suns, yet you can’t name a single positive thing he has accomplished in his Presidency, you need to diversify your news outlets. Start with the First Step Act.

If you voted for and love Donald Trump, and can’t name a single bad thing he has done since becoming President, you need to diversify your news, too. Start anywhere.

How reporting the facts minus a piece of critical information creates a mistaken impression and distorts the truth.

For example: An article like this one on NPR: U.S. Abortion Rate Falls To Lowest Level Since Roe v. Wade.

“The report by the Guttmacher Institute, a research group that supports legalized abortion, puts the rate at 14.6 abortions per 1,000 women of childbearing age (ages 15–44) in 2014. That’s the lowest recorded rate since the Roe decision in 1973. The abortion rate has been declining for decades — down from a peak of 29.3 in 1980 and 1981.” -excerpt from NPR article

But that is not the problem. The problem is with how the data is presented:

“The report also finds that in 2013, the total number of abortions nationwide fell below 1 million for the first time since the mid-1970s.”

While the above sounds factual, if only couched in the context of the Guttmacher Institute study, it suggests as true that anyone really knows how many legal abortions are taking place in the U.S. on a yearly basis.

What the article fails to mention, what readers and even many voters with strong opinions on abortion rights in America do not know, is that reporting and tracking of abortion rates in the U.S. is not now, nor has it ever been centralized, nationwide or in any way complete.

“No National Requirement for Data Submission or Reporting”

Some states, including New Hampshire, Maryland and California, do not report or reliably track legally performed abortions. Which means any debate about abortion- moral, legal or otherwise- lacks the very information crucial to setting responsible policy:

How many abortions are taking place and why?

But that doesn’t stop otherwise credible news agencies from claiming Abortion rates in US reach a decade low, CDC reports.

Where and Why and Why it Matters

Regardless of your particular views on the morality and legality of abortion, we should all be able to agree that abortion is likely not the best form of birth control available. If for no other reason than that abortion, just like any other invasive medical procedure, involves a certain inherent health risk to the person undergoing it.

Knowing who, where and why would help advocates and activists alike, as well as legislators, know what is working to reduce unplanned pregnancies and the corresponding need for abortion, and what isn’t.

Was there a serious reduction in the number of abortions performed as a result of the Obama Administration’s work to make birth control more widely available and affordable?

So, are the NPR article and CNN articles “fake news’? Not exactly. The articles are reporting the statistical facts about abortion numbers as gathered by the CDC; but they are also misrepresenting that information, whether intentionally or not, as a full picture of abortion in the U.S.

Welcome to the wild world of relative truth in the 24/7 news cycle.