Turkish President Tayyip Erdoğan is building a legacy of bloody conflicts, extreme ideology, and a closer relationship with Russia. 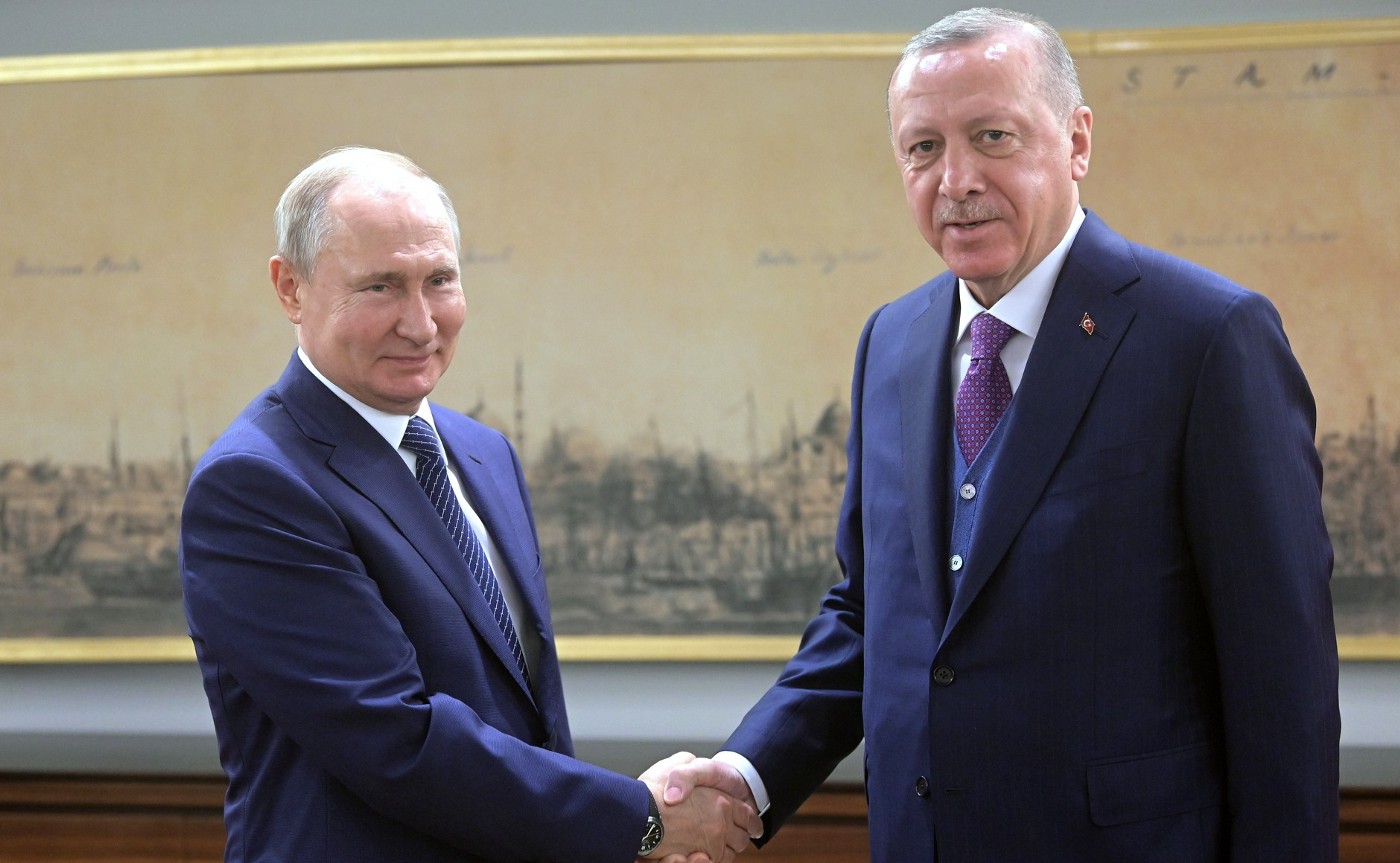 Heavy fighting broke out Sunday in a conflict over the long-disputed Azerbaijan region, killing dozens and injuring hundreds of soldiers and civilians. How the fighting began remains unclear. Both Armenia and Azerbaijan blame each other.

Ganja, Azerbaijan’s second largest city, and the Armenian-controlled capital of Nagorno-Karabakh, have been under attack from rockets, artillery and drone strikes.

“Thanks to advanced Turkish drones owned by the Azerbaijan military, our casualties on the front shrunk,” said Azerbaijani President Ilhan Aliyev in an interview with Turkish news channel TRT Haber. “These drones show Turkey’s strength. It also empowers us.”

On Thursday, U.S. Congressional lawmakers introduced a bipartisan resolution condemning Azerbaijan for the outbreak of violence against Armenia in the contested area Nagorno-Karabakh, and calling out Turkey for interfering in the conflict.

The measure, H.RES.1165, sponsored by Rep. Jackie Speier (D-CA) and cosponsored by 37 other members of the bipartisan Congressional Armenian Caucus, condemns Azerbaijan’s military operation in Nagorno-Karabakh and denounces Turkish interference.

The resolution states that the attack follows “increasingly aggressive rhetoric and destabilizing actions on the part of Azerbaijan President Ilhan Aliyev’s government toward Nagorno-Karabakh and Armenia.”

It also states that the House of Representatives “denounces Turkey’s reported participation in and escalation of the conflict under President Tayyip Erdoğan”. The resolution also mentions the “Armenian Foreign Ministry’s claim that Turkey is operating F–16 fighter jets in the region and the claim that on September 29, 2020, Turkey shot down an Armenian Su–25 fighter jet in Armenian airspace.”

In October of 2019, U.S. President Donald Trump imposed economic sanctions on Turkey and called for an end to the violence against Kurdish forces. Turkey continues to claim that the Kurds they have targeted are terrorists and Turkish officials have halted negotiations for a trade deal.

Trump also sent Vice President Mike Pence to Turkey last year to “pursue a ceasefire”. At the time, Pence said “the United States of America wants Turkey to stop the invasion, to implement an immediate ceasefire and to begin to negotiate with Kurdish forces in Syria to bring an end to the violence.”

Shortly after the American president imposed sanctions on Turkey, Erdoğan responded: “Regardless of the threats and pressures, we are determined to continue the operation until the end. I am stating clearly, we will absolutely finish the job we started.”

The media has largely ignored this conflict and its dangers for a number of possible reasons: Turkey is an American ally, the elections are upcoming, and/or the newsworthy aspect.

Though this conflict may not be newsworthy enough for some in America- in that it doesn’t necessarily impact the upcoming U.S. election- Erdoğan’s actions are deeply worrisome. A once-staunch American ally in a strategic area- Turkey- is growing more and more hostile to Western powers and ever closer to Russia and Iran.

Turkey’s ruling Justice and Development Party (AKP) government has spent millions in promoting political Islamist ideology abroad through schools. Turkish President Erdoğan blames Fethullah Gülen, a Turkish preacher living in the United States, for a failed military coup in July of 2016 and now wants to remove/replace the Islamist schools due to their affiliation with Gülen.

Gülen spoke to U.S. media after calls for his extradition, suggesting the coup may have been staged by Erdoğan himself. Gülen claimed past coups have been better planned and executed, leading him to believe the 2016 “coup” was meant to appear as one and not succeed.

In the wake of the failed coup in 2016, Erdoğan conducted massive arrests of tens of thousands of people for suspected links to Gülen. Over 100,000 people have been fired or suspended from jobs, including journalists, politicians, teachers, and civil servants- all under the auspice of taking down people involved in the coup.

The Gülen movement has built a network of schools across the country, making it one of the largest charter school organizations in the United States. There are four Gülen universities in the U.S.: American Islamic College in Chicago, Illinois; Virginia International University in Fairfax, Virginia; Respect Graduate School in Bethlehem, Pennsylvania; and North American University in Houston, Texas.

During an interview with 60 Minutes, Mary Addi, a teacher at one of the many U.S. Gülen schools, recently spoke of the costs of the Gülen schools for American teachers.

“They want to give you the impression that they’re just hard-working guys over here to try to educate our kids, because American teachers are just too stupid,” said Addi.

Addi said after she married a Turkish teacher, she learned that Gülen takes 40% of his salary back to the school for a secret fund used by the movement. The allegations resulted in a U.S. government investigation into the schools for immigration fraud and misuse of taxpayer money.

Before the attempted coup, Erdoğan had actively lobbied for the opening of “Turkish schools.” And he is still doing so, creating the Maarif Foundation to take control over the Gülen movement’s schools.

Many Turkish activists and critics of the the Islamist-rooted government ideology of Erdoğan have accused the Turkish President of seeking to impose strict Islamist values on private citizens and limiting the civil liberties of women.

Erdoğan is working to bring his ideologies into the United States. All U.S. religiously-affiliated schools have the freedom to operate and provide students with an education. However, what if they are affiliated with more than just a religion-but also a coup d’etat or a Turkish authoritarian?

To understand Erdoğan’s dangerous ideology, here are a few things to know about Turkey’s President:

In 2014, Erdoğan declared women are “not equal to men due to their delicate natures,” adding that “our religion has defined a position for women: motherhood.”

He has often referred to women who work as “half persons” and has even said women should avoid laughing in public, prompting harsh backlash amongst human rights activists.

He has utilized his religion to tell Muslim families they should not engage in birth control or family planning, equating it to a “treason that caused a generation” to “dry up”. He is against cesareans and has encouraged women to have at least four children to increase Turkey’s population.

“We will multiply our descendants. They talk about population planning, birth control. No Muslim family can have such an approach,” Erdoğan said in a televised speech. “Nobody can interfere in God’s work.”

“Erdoğan has said one of his goals is to forge a ‘pious generation’ in predominantly Muslim Turkey ‘that will work for the construction of a new civilization.’ His recent speeches have emphasized Turkey’s Ottoman history and domestic achievements over Western ideas and influences,” according to a recent Reuters report.

According to the report, Erdoğan’s “drive to put religion at the heart of national life after decades of secular dominance” has resulted in the government pouring billions into religious education, even prioritizing religious institutes over hospital and coronavirus initiatives.

Many of the AKP Party deputies from the Grand National Assembly of Turkey and even members of parliament have allowed Erdogan to put himself on a pedestal, reiterating claims that he is a sort of prophet.

Considering the burgeoning problems in Turkey under the Erdoğan administration, and the upheaval, it is difficult to predict what the next year might hold for the region.