Elitism is Imperiling the Democratic Party

“Defund the police!” is an excellent example of the pernicious elitism eating away at the working-class heart of the Democratic Party. 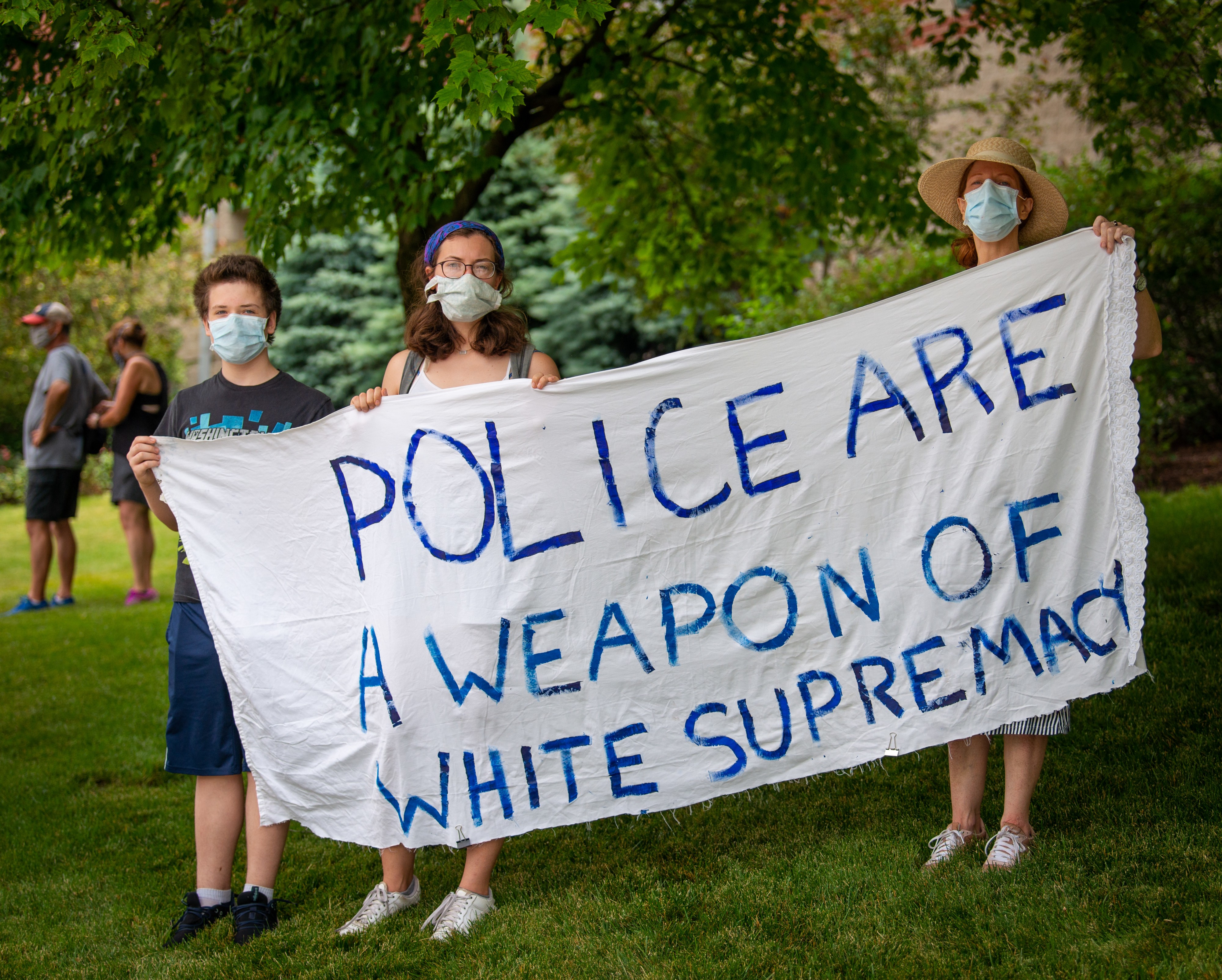 Midday on a rather humid Sunday, about 75–100 protestors gathered for a peaceful march on the southern edges of Elmhurst, Illinois, an overwhelmingly white suburb 10 miles west of the Chicago city limits. June 28, 2020. (photo: risingthermals)

It may sound great when shouted through a bullhorn. It looks good tagged on a police precinct wall, right next to the universally accepted symbol for anarchy. It makes for a nice trend on Twitter.

But “defund the police” it is a blatantly elitist idea.

Obviously, it is the easiest thing in the world for wealthy liberals, middle-class progressives, college campus revolutionaries and other privileged groups to call (on Twitter) to end a public service they don’t use and never need.

Being privileged in America means never having to call the police; never needing to. Never feeling threatened or scared, never being in any danger; neither falling victim to nor impacted by any form of crime beyond contact with the occasional speeder or inattentive driver.

Not ever needing to call the police is nice, but it is one privilege which is, quite unfortunately, not shared by everyone.

People who live in areas beset by high crime rates; poorer people, in other words, often have a completely different life experience.

Defund the police won’t hurt the wealthy. Wealthy people and companies can always hire private armed security guards, as many as they need. The wealthy have gated communities, door men, security systems, bodyguards.

If law enforcement agencies in America were all disbanded outright tomorrow, there would be a massive boom in the private security sector on the very next day.

Defund the police won’t hurt the police; not at all. Upon a total abolition or major reduction of law enforcement in America, all the out-of-work police officers would immediately find work… with the many private security agencies which had sprung up like magic overnight.

Defund the police won’t really even hurt the middle-class, not suburbia- not for a long time anyway. These areas are usually far from heavy concentrations of criminality. A boom in home security systems, surveillance systems and neighborhood watch groups would follow an absence of policing. Home owners associations would add more in dues, as neighborhoods pooled resources for private security guards and regular patrols. No problem.

Which leaves, the poor. Working-class neighborhoods, neighborhoods closer to high-crime areas, houses and businesses, people and companies would not be grateful for privatized security they can’t afford replacing local police departments.

As social luminaries have been pointing out for a generation or more: Policing needs to be better in low-income, high-crime areas; not replaced by something worse.

“So while they waiting for legislation to pass and everything, we next door to the killer. We next door to ’em in the projects, where there’s 80 [expletive deleted] in the building. All them killers they letting out, they right there in that building. But just cause we’re black, we get along with the killers or something? Or the rapists? What is that? We need protection too.” — Tupac Shakur, 1994.

Tupac Shakur was also, sadly, familiar with police brutality and its effects. But in the many enlightening interviews Shakur gave during his short life, he warned often against over-generalizations and oversimplifications.

“…it wasn’t white people [as a whole] that beat me down in Oakland. It was two. white. cops. Two white, crooked cops. That’s what that was…We have to be more realistic about our enemies,” Shakur said about his own experiences with police brutality.

Chicago Mayor Lori Lightfoot is one outspoken voice on the left who does not support efforts to defund the police. Lightfoot knows only too well how much people in dangerous Chicago neighborhoods need police, and more policing resources than they are currently getting as the Windy City’s violent crime-rate continues to skyrocket.

“When I hear this issue around defunding, I hear, ‘We don’t have enough resources in communities of color, and you spend way too much on the police.’ I agree with that piece. But let’s break down the practicalities of what defunding means.”

“In our Police Department, about 90 percent of the budget is personnel. When you talk about defunding, you’re talking about getting rid of officers. Most of our diversity lies in the junior officers. So when you’re talking about defunding the police, you’re talking about doing it in a context of a collective-bargaining agreement that requires you to go in reverse seniority, which means you’re getting rid of black and brown people. Which means you are eliminating one of the few tools the city has to create middle-class incomes for black and brown folks. Nobody talks about that in the discussion to defund the police.” — Chicago Mayor Lori Lightfoot, New York Times. June 22, 2020.

Defunding the police is like the globalization of American manufacturing. Sure, it sounded good. Sending good American manufacturing jobs across the border and overseas to our emerging neighbors was sold as a mutually beneficial, beneficent, benevolent relationship from which both parties would prosper. Better jobs for them, cheaper goods for us.

The reality, as we have witnessed with our own eyes over the past 30-years, has been a gutting of American manufacturing, a transfer of American wealth abroad, and an outsourcing of it all to countries with lower labor standards, fewer environmental restrictions, and no pesky regulations.

Careful observers are starting to note the upward limits of such an exploitative strategy, as well as the sobering in-practice realities. Who was this supposed to benefit again? Surely not poor people in working-class neighborhoods in the U.S. and around the world.

As with the left’s designs on defunding the police, the over-globalization of American manufacturing hurt society’s most vulnerable more than any other group. The left owes it to the working-class, which has faithfully voted Democrat more years than not, to exercise more caution.

The left must, as Mayor Lightfoot instructed, “break down the practicalities of what defunding means”.

Actually asking the people who would be most impacted by defunding the police- rather than relying solely on the opinions of those privileged enough not to need crime prevention in their communities- would be an excellent place to start.