C-SPAN presents: The horror movie no progressive should have to face. Why it should be required viewing for every voting Democrat in America. 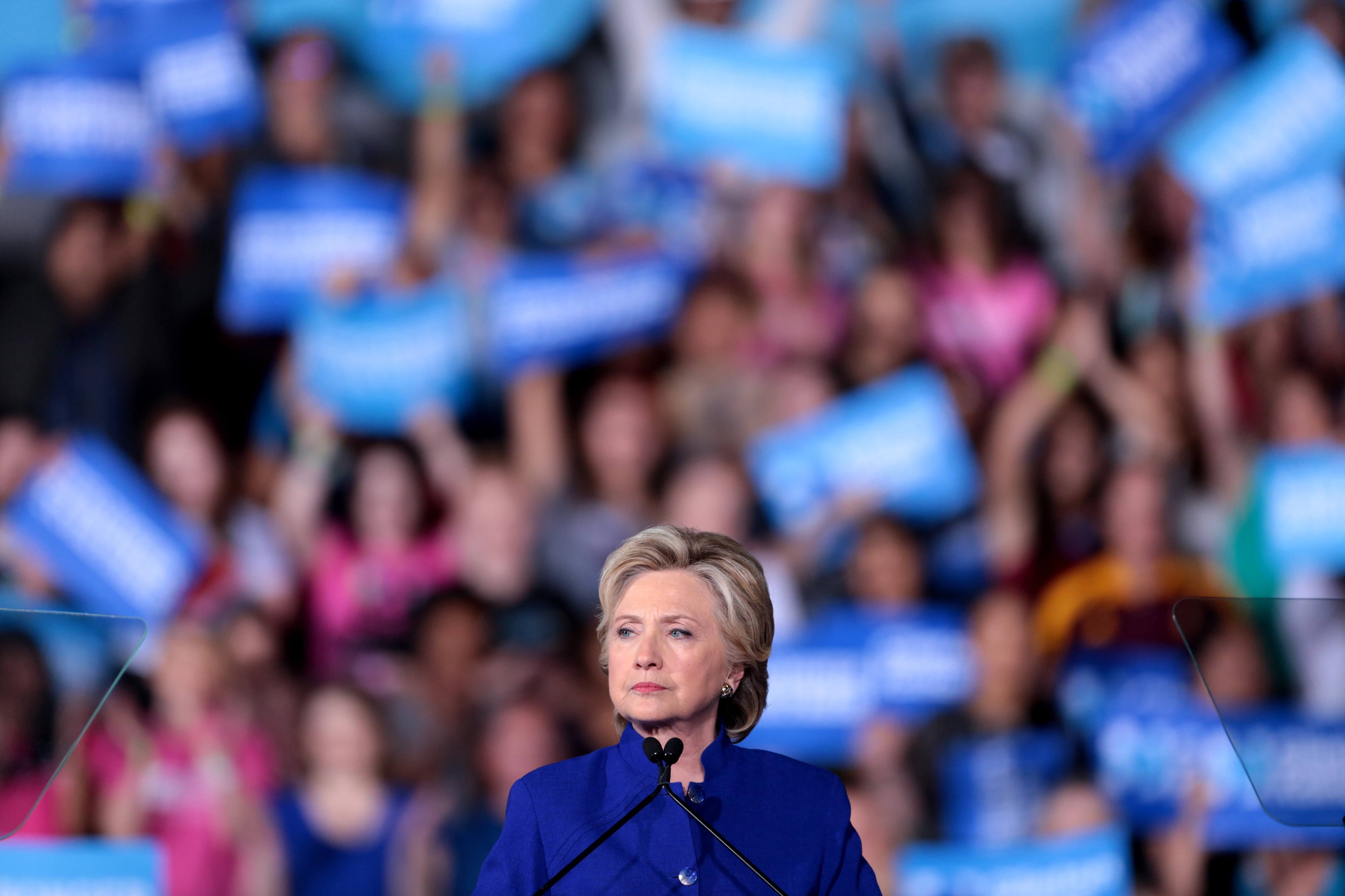 This wisdom teaching is possibly Joseph Campbell’s, but it is probably far older. It means that wherever you most fear to go may offer wisdom and insight you could gain nowhere else.

Which is why every voting Democrat in America should watch the 2016 C-SPAN coverage of the Hillary Clinton campaign victory party that wasn’t. Every voting progressive should view the video as if they were an NFL coach watching footage of their last losing game as if winning the next one depended on it.

The fact that Democrats have been afraid to face the video above for all the days of the Trump administrtaion, should tell any reasonable individual interested in examining history from the perspective of not repeating it all they need to know.

It’s long; 6 hours. Longer. But they were an important six hours. A great deal changed in those six short hours.

Unlike the Trump campaign in 2016, which didn’t allow embedded mainstream reporters into the Trump watch party, the Hillary Clinton campaign knew Clinton was going to win.

They didn’t think it. They knew it.

So the Clinton campaign threw a huge party at the Javits Center in NYC, invited all their friends and supporters. There was no shortage of reporters to document every history-making moment; including the moment when Hillary Rodham Clinton was to be elected the first female president in U.S. history.

For the Trump campaign, we have Donald and Melania Trump riding down an escalator. For the Clinton campaign, we have the video Encyclopedia Britannica. Every moment has been enshrined forever by embedded reporters and political pundits reacting in real time.

We have it all. From the moment a television talking-head speculates that Donald Trump might not even show up when he loses, to the moment Clinton campaign chair John Podesta takes the stage to tell the shocked and weeping crowd that, in fact, Clinton was the no-show.

Because she’d just lost the race to Donald Trump.

If you watch the video, and read the companion piece, “In Their Own Words: The Story of Covering Election Night 2016,” you will see it all with new clarity.

It watches like a horror movie in which everything looks peaceful onscreen at first, yet the audience knows the entire time what terrors await the unsuspecting victims in the hours to come.

You can see several moments when the tide starts to turn from smiles to tears at Javits. When Donald Trump is announced as the winner of North Carolina, the crowd actually screams.

But if you can make it through, there is some solid gold.

The gut reactions of the some of the political pundits reveals, in the immediate aftermath, genuine shock. With that shock came some poignant, first-impression insights which have been forgotten in the years since.

And this is where it starts to get very interesting.

“The Clinton people and people aligned with Clinton had been saying ‘We’re turning out a massive Latino vote in Florida,’ but reality was not matching their boasts. It was the first sign of the evening. I thought, ‘If their boasts about how well they were doing in Florida were off, they might be off in other places.” — John Dickerson, CNN. 7:22 p.m. election night.

Now, while pundits at CNN were starting to notice something was a bit off about some of the Clinton team’s projections in Florida, and indeed, off about the network polls- people were already piling into the Javits Center.

The C-SPAN video footage begins at 8:00 p.m., with good news for Clinton about Florida. The Javits crowd cheers.

Hillary Clinton Democrats pledged allegiance to the flag at the 28:29 mark, around 8:30 p.m. They sang the National Anthem at 29:15; prayed to God to break the glass ceiling, “on this historic night!” in an invocation at 31:26.

Meanwhile, in the newsroom, bad news was piling up for Clinton. Donald Trump was showing strong very early in the race. Journalists felt things shift heavily in Trump’s favor between 8:00 p.m. and 8:30 p.m.

Voting Democrats in the Javits Center, of course, were being told none of this. Oblivious, they booed news that mid-Western states had gone for Trump and cheered news that Clinton had carried New York. Clinton Democrats danced and clapped at the 1:00:00 mark, about 9:00 p.m., in front of empty bleachers which would never be filled with potential Hillary Clinton cabinet members seated behind her as she made her victory speech.

After 9: p.m., came the news that state after battleground state was too close to call. But behind the scenes, the districts reporting, and the voters comprising those districts, were already telling the tale.

Clinton was behind, way behind; in Pennsylvania, in Ohio, in North Carolina and Florida. In Michigan.

Voting Democrats should listen to the careful orchestrations of the pundits, the meticulous concealing of bad news from Democrats; the continuous attempts to find a, “path for Clinton,” to victory even as states in the “Blue Wall,” fell to Donald Trump.

Which is interesting because a market sell-off had happened at 9:45 p.m. Down futures had dropped 500 points as the markets braced for the unexpected Trump win.

James Carville knew it was over at 10:00 p.m., even as Democrats at the Javits Center were cheering the news that Hillary Clinton had carried- as expected- New Mexico.

There are other key phrases Democrats might recognize in retrospect as clear foreshadowing of what was to come, with some obvious attempts to conceal how bad things were looking for Clinton. Phrases like, “things are looking optimistic for Trump…but we’re still waiting,” and, “Trump is doing remarkably well.”

“Cracks in the blue wall,” and, “Trump is over-performing in all the key states.” Or: “This is going to put the polling industry out of business.”

Clinton would soon need to, “run the table,” to win. In Florida, Donald Trump was, “ahead”, with not enough uncounted votes for Hillary Clinton to, “retake the lead.” NC, same. PA, “trailing… but close.”

Yet at the 2:30 mark in the video, around 10:30 p.m., New York Gov. Andrew Cumuo takes to the stage to tell Democrats at Javits: “I believe and you believe- that Hillary Clinton will be the next President of the United States!”

But as the results keep coming in, the crowd reacts in obvious dismay as Trump’s electoral vote lead over Clinton climbs higher and higher. The news that Trump has flipped more Blue states Red is not welcome in the Javits Center.

At the 3:06 mark, we can witness the birth of Democratic hatred for MAGA hats: As the mood in the Javits Center darkens, images of ecstatic Trump supporters celebrating by assuming those hats are permanently imprinted on the brains of every Democrat watching. Again at the 3:31 mark.

The Clinton campaign, possibly on autopilot by now, was still showing slick infomercials about Hillary Clinton at the 3:38 mark. One more chant of, “we believe that she will win!” is heard.

At the 4:01 mark- fittingly, about midnight- Democrats at the Javits Center and watching at home hear the horror spoken aloud on a news program for the first time: “President Donald Trump”.

The video ends after 2:05 a.m., with Clinton campaign chairman John Podesta taking to the stage to tell the crowd to go home: “Several states are too close to call, so we’re not going to have anything more to say tonight.”

The media, pollsters, and politicians were wrong in 2016. Have they confronted and corrected 2016’s failures? If they have spent the past four years concealing and obfuscating those failures, as they did at the Javits Center in 2016, Democrats may be in for Election Night Horror: 2020.