As protestors topple statues, set up autonomous zones, and vandalize monuments on the nightly news, a backlash is growing. 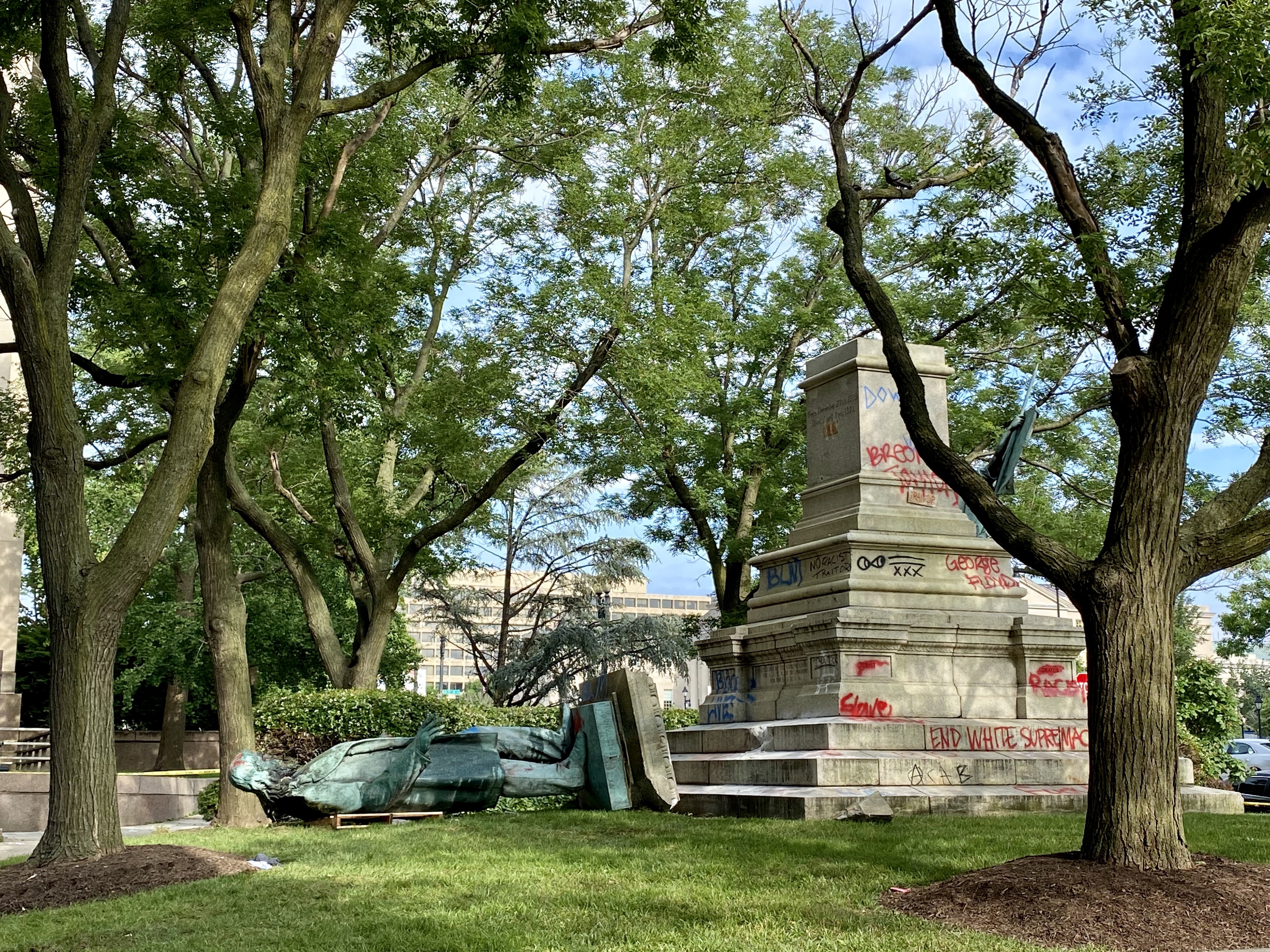 The statue of this former confederate was toppled on 6/20/2020 by BLM protesters. (Photo: Joe Flood)

The Great Un-Whitewashing of American History, long overdue, has begun at last. It is going to take a great deal more than a few sturdy ropes and hastily Googled instructions on “How to Topple a Statue”.

If confederate statues, art work, and other monuments in publicly-owned spaces are to be removed; by all means, let them be. How confederate generals and politicians got an honorable mention in the footnotes of American history is a great mystery anyway. Aren’t the winners supposed to write history?

Right now, progressives are emerging the winners and may well get to write the next chapters. The brutal killing of George Floyd has sent a tidal wave of anti-racism that promises to sweep all before it. This is a powerful moment when meaningful progress towards racial and social justice could be made.

If decisions about the un-whitewashing of American history continue to be made by Twitter decree and executed by angry mob, this wave of support for meaningful changes is going to evaporate long before November.

Important decisions cannot and should not be made by a mob, however compelling the mob’s reasons may seem to some. Mob rule is dangerous, unpredictable, utterly uncontrollable. Historically, it also creates crippling backlash for progressive movements.

Luckily for progressive activists, we already have a process by which difficult and sometimes unpopular decisions are made everyday in our Democracy.

We vote on it; and we elect legislators who promise to represent the will of the people in these matters. Committee decisions by elected and appointed officials are what erected these now-objectionable statues in the first place; it is by this same civilized method that statues must be undone, if they are to be.

Video footage and photographs of vandals attempting to topple an Andrew Jackson statue across from the White House this week are certainly not helping the progressive cause or the quest for restorative justice.

In the short term, a few statues may be torn down. In the long term, forcibly removing these monuments from public spaces illegally is going to cause resistance and delay the more important, long-term, and far-reaching implications of the un-whitewashing of American history.

Schools are named after Andrew Jackson, Thomas Jefferson, and George Washington; as are streets and entire cities.

The entire state of Rhode Island is officially named “Rhode Island and Providence Plantations”, reflecting the state’s history as a major hub for the trade of enslaved Africans. Rhode Island State officials are- this week- taking steps to change it to “Rhode Island”.

Yale was directly endowed with money generated from the Middle Passage genocide by a very prolific trafficker in human persons named Elihu Yale. New York was named after James II, the English Duke of York, who, along with his brother King Charles II, once held the global franchise on forcibly importing human beings from Africa to work in the plantations of the American South and the Caribbean.

Even our maps are wrong; if you were shown a Mercator Projection in school, you were looking at Euro-centric propaganda whether you knew it or not. Australia and Antartica are not, in point of fact, bigger than Africa.

The solutions to this important issue are not going to be as straightforward or as simple as knocking over a statue. After careful consideration, cooler heads in our Democracy may well decide to treat this as a problem requiring more creation than destruction.

Only now, the people making decisions about who constitutes as an American hero and progenitor are a more diverse and mindful bunch: Living in the Information Age with perfect 20/20 hindsight and modern morality.

As such, there likely won’t be any more statues and monuments erected to honor Jackson, Washington and Jefferson. Which is fine, because we don’t really need them.

Every American school kid, and every American immigrant, knows about Jefferson, Jackson and Washington; they are on our money, our streets, our schools and our towns. What is missing from American History are the other stories. Stories about Harriet Tubman and Sojourner Truth; about Frederick Douglass and Nat Turner.

For some Americans, their story didn’t start with the Mayflower or the Declaration of Independence. Many of the first Americans were brought here against their will via the Middle Passage far earlier- a brutal genocide every school child should grow up knowing at least as much about as they do the Holocaust, which isn’t nearly enough.

Colombus, the whitewashed fairytale of the Mayflower- and other fictionalized accounts of historic events- should truly rankle any astute student of American history, or patriot, regardless of heritage.

Fostering a more diverse, expansive and nuanced version of American History is something a majority of Americans would gladly support. Removing some statues and other monuments via a reasonable, responsible, and democratic process is gaining support, as well.

But a majority of Americans are not yet in favor of removing statues and destroying monuments- certainly not forcibly and without debate.

These images of American history being- not expanded and recreated- but unceremoniously toppled by an angry mob are not going to help Democrats on Election Day.

These irresponsible actions may force a great many undecideds and independents into Donald Trump’s corner. Many of these voters are just as anxious as Democrats to vote out Donald Trump; they are not, however, convinced that the Democratic Party is offering anything better.

And in many ways, what the Democratic Party is offering by indulging this wanton violence, destruction and lawlessness and excusing it as righteous will seem much worse.

Anyone claiming that moral superiority gives them the right to use violence to achieve their ends is immediately and deeply suspect to peace-loving people of every political stripe, every nation, every color, every creed.

History provides us with plenty of examples of the horrors that befall such well-meaning arbiters of violence and their innocent victims. History’s revolutionaries have frequently been just as incompetent, immoral and unscrupulous as the regimes they replaced through terrorism, murder, and exploitation. The French Revolution and the Bolsheviks are two examples.

With it, we can build something better; something for everyone. We might even be able to eradicate generational poverty and achieve restorative justice.

But we will still have to build it on what others have left, imperfect as it is. And we will have to do it together, or not at all.