Dems Should Resist the Temptation to Attack Amy Coney Barrett

Doing so won’t prevent her confirmation, but it might hurt Democrats on Election Day. 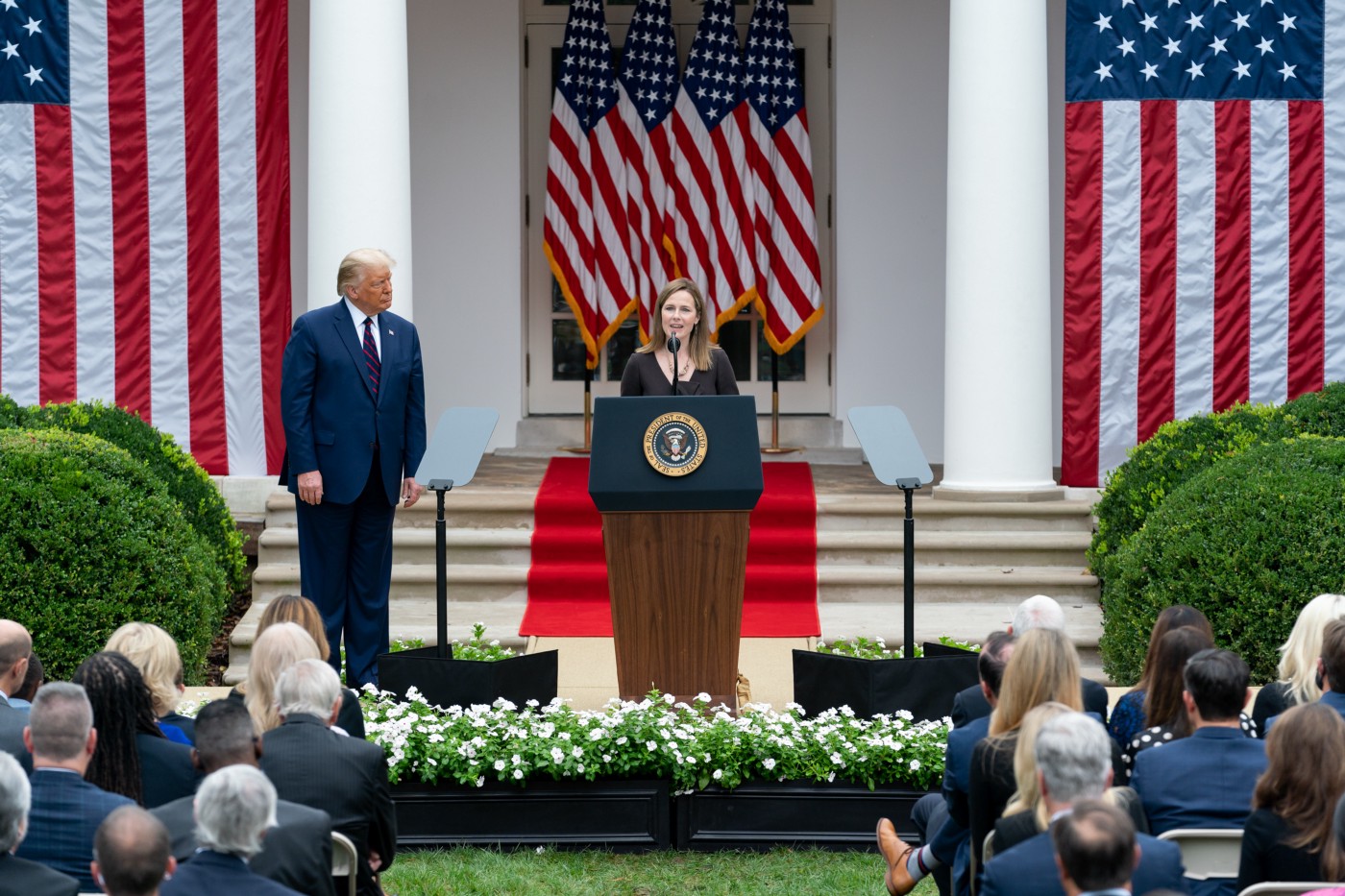 Judge Amy Coney Barrett delivers remarks after President Donald J. Trump announced her as his nominee for Associate Justice of the Supreme Court of the United States Saturday, Sept. 26, 2020, in the Rose Garden of the White House. (Official White House Photo by Andrea Hanks)

When U.S. President Donald Trump was diagnosed with COVID-19, some on the left rejoiced in unseemly ways. Savvier politicians knew better and refrained, but from calling COVID-19 “God’s gift to the left”, to publicly wishing death on Donald Trump, celebrities and Democratic luminaries in the press let fly.

For many- COVID number crunchers who knew the odds were around 95% on Trump making a full recovery, and others who just didn’t hold with the “wrath of God” narrative- it all seemed a bit mean-spirited and pointless. If Democrats really are winning, if Joe Biden really is a shoo-in for the presidency at this point, why risk it?

For all their objections to normalizing the administration and behavior of Donald Trump, nothing does more to make even his rudest Twitter rants appear mainstream than a wave of equal and opposite bile from blue-checks on the left.

Unfortunately, there is every indication that this behavior was merely a precursor for what America is in store for over the next few weeks.

Barring some unusual circumstance, Amy Coney Barrett will be confirmed by the U.S. Senate between now and Election Day. Democrats can grouse all they like about precedent, and the sanctity of elections, but the U.S. Constitution is clear. Even the late R.G.B. herself was clear on this point: The President nominates Justices to the Supreme Court for the Senate to confirm or reject, and his term ends when his term ends.

Even if Joe Biden wins in November, Trump will remain president until January when Biden is sworn in.

Trump has nominated Amy Coney Barrett. She is well-qualified, as even those ideologically opposed to her, and opposed to Trump’s right to nominate her this close to an election, have admitted. If Senate Leader Mitch McConnell has the majority of votes needed to confirm her at the conclusion of her hearing, and there is every indication he does, she will be named to the Supreme Court. There isn’t much Democrats can do about it.

Nevertheless, before this inevitable confirmation occurs, the militant progressive Twitter wing of the Democratic Party- whom some have called the editor-in-chief of the New York Times, and not without reason- will be treating undecided voters to some truly ugly sentiments in a pointless effort to undermine Barrett.

Among these ugly sentiments is the idea that interracial adoption is white supremacy. This idea is only new on the progressive left. Astute observers will note that far-right extremist hate-groups and anti-desegregation proponents have long opposed interracial adoption. Amy Coney Barrett, like millions of other Americans and other adoptive parents around the world, has two adopted children who don’t happen to share her race. The idea that this is somehow sinister or disqualifying isn’t going to impress other adoptive parents who vote, and the attitude seems unlikely to win many converts.

Then, there is Amy Coney Barrett’s faith, which is the lowest of low hanging fruit in the current hyper-polarized, Hollywood-esque minefield of social media. Dozens of women- ostensibly feminists who still consider the cinematic glorification of violence against women to be entertainment- are already besieging the Supreme Court dressed as characters from “The Handmaiden’s Tale”. Again.

That the author of the “The Handmaiden’s Tale” has gone on record recently as saying her work was not based in any way on Amy Coney Barnett’s People of Praise religious group, is not mentioned. These attempts to link a real-world, sincerely held religious faith with an imaginary one in a dystopian science fiction novel isn’t likely to convince undecided voters to support Joe Biden.

Many admiring critics of Atwood’s work have warned against drawing parallels with fundamentalist Muslim faiths. This fact should deter the left from applying logic they would find clearly unfair in any other situation.

Amy Coney Barrett is a person of faith, something she shares with over 70 million Catholics, an even greater number of Christians of other denominations, observant Muslims and Jews- all fellow “People of the Book”- and other faiths as well. Many will take exception to any intimations that a sincerely held religious faith, however odd that faith might seem to outsiders, is a disqualification.

Concern about female bodily autonomy and health care will ostensibly be the reason for the gloves-off approach. Pro-choice advocates will keep reminding us that Roe V. Wade is in constant and ongoing peril. Advocates for the flawed masterpiece that is Obamacare will keep decrying its imminent death.

While these things may be partially true, it is also true that the Supreme Court, in spite of two high-profile conservative appointments since 2016, has delivered major victories for the progressive platform in the past two years. “In a Term Full of Major Cases, the Supreme Court Tacked to the Center,” the New York Times reminded us in July.

That conservative justices have voted contrary to how conservatives voters wanted them to vote is beyond a good sign. Supreme Court Justices, whatever their personal religious convictions, should not be legislating from the bench.

The balance of power breaks down when any of the branches of government try to do things outside the scope of their official role.

For instance, former President Barack Obama’s “phone and pen”. By using his executive authority, Obama was able to enact sweeping changes without congressional approval. The Paris Climate Accord, the Iran nuclear deal; all done with Obama’s phone and pen, all undone by Trump’s.

Democrats should challenge Barrett’s record, ask her about the U.S. Constitution and how she views it. Personal attacks on Amy Coney Barrett, like publicly wishing death on Donald Trump, will only hurt Democrats.

No amount of calling Amy Coney Barrett a fanatically religious anti-feminist on Twitter will prevent her confirmation; just as no amount of publicly wishing death on Donald Trump was going to kill him, or he would have dropped dead years ago.

At some point, it all starts to blend into a sea of incolate ranting about the End of Democracy. This relentless hyperbole sounds too much like fiction, and is too easily dismissed as such; wars and rumors of wars. Politicians have been saying similar things about the opposing party since time out of mind.

If Democrats really are winning by as much as the polls say they are, if indeed a blue wave is about to sweep Joe Biden into the Oval Office, and the Senate into Democratic Party hands, why risk alienating undecided voters or religious moderates?

Though it is a lost cause which might hurt the Democratic Party, Democrats might not be able to help themselves.