Step right up, folks. Get your conspiracy theory debunked here. A simple mathematical formula to solve for perspective. 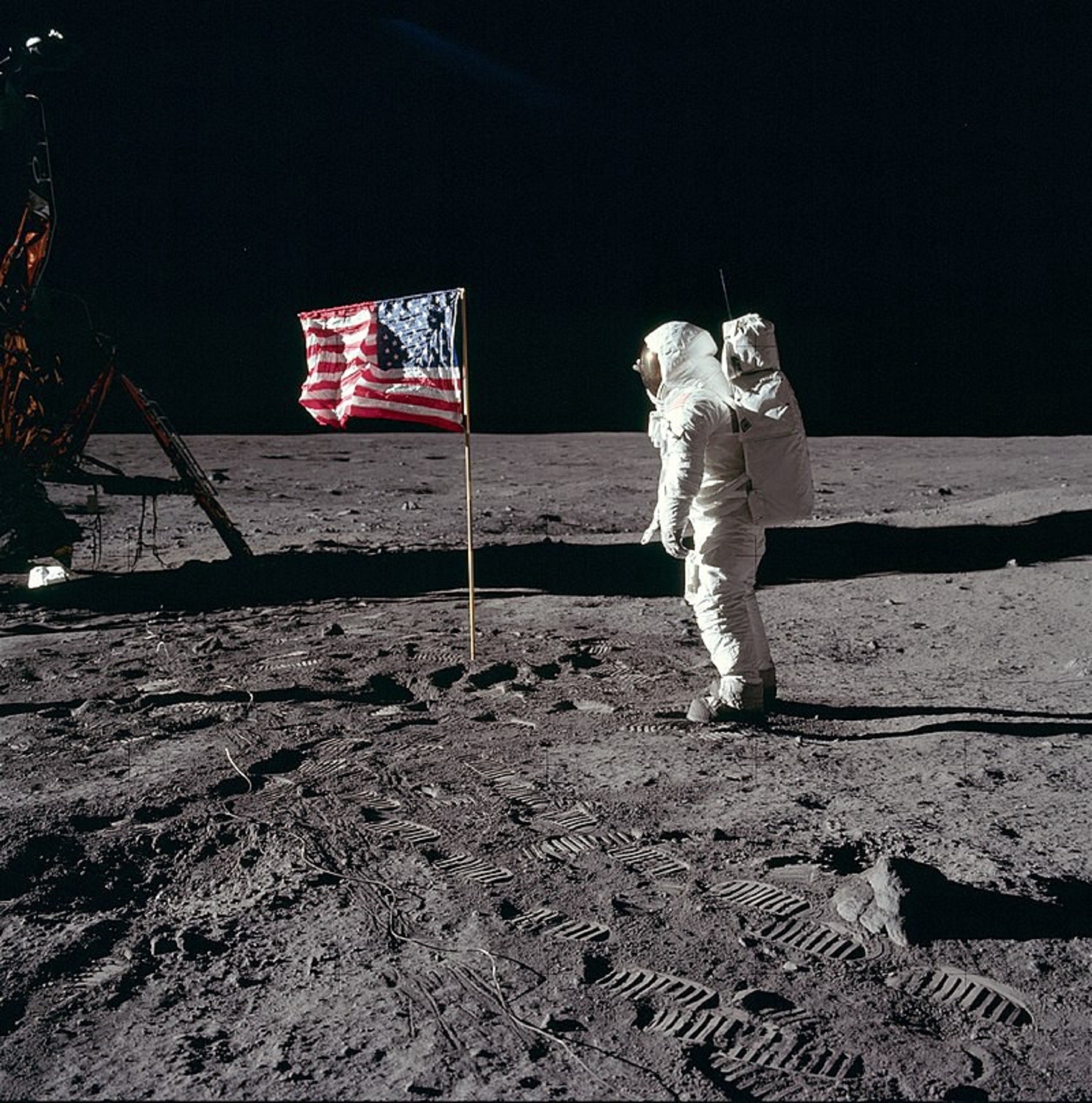 Buzz Aldrin salutes the U.S flag on the Moon (mission time: 110:10:33). His fingertips are visible on the far side of his faceplate. Note the well-defined footprints in the foreground. Buzz is facing up-Sun. There is a reflection of the Sun in his visor. At the bottom of Buzz’s faceplate, note the white ‘rim’ which is slightly separated from his neckring. This ‘rim’ is the bottom of his gold visor, which he has pulled down. We can see the LEC straps hanging down inside of the ladder strut. In the foreground, we can see the foot-grabbing loops in the TV cable. The double crater under Neil’s LM window is just beyond the LM shadow.

I don’t believe in most conspiracy theories for a simple reason: They aren’t logically practical, given what we know about human nature.

Two people can keep a secret, but only if one of them is dead.

In order for 9/11 to have been an inside job for instance, or the moon landing to have been faked, or Donald Trump to be a deep-cover Russian agent, too many people would have had to keep secrets about those events for far too long. It just doesn’t make sense.

People get married. They get divorced. People have life altering experiences and religious conversions; people confess on their deathbeds.

The chances of every single person being involved in perpetuating a lie of that magnitude staying silent would be statistically impossible. Someone would've blabbed.

Is your favorite conspiracy theory possible?

Then multiply that number by the number of years (y) that have passed since your particular event took place. Take 100, divide it by the product of your equation and you get a good idea how possible conspiracy theories really are.

Giving us a 0.00111557% chance that no one would have spilled the beans to Barbara Walters by now if 9/11 really was in inside job by the Bush administration to justify the War on Terror.

If you are someone who, in spite of the Mueller report failing to find any credible evidence of it, still believes U.S. President Donald Trump is a deep cover agent for the Russian government, this formula may be for you.

Is Trump really “Putin’s Bitch,” as some tasteful critic was kind enough to point out on Trump’s star on the Hollywood Walk of Fame last week?

First, how many people would need to be in on the secret?

Trump, obviously. Putin. Who else? Let’s say the head of Russia’s intelligence services, and that person’s right hand. That’s four. Trump has been in business a long time, longer than Vladimir Putin, so Putin’s predecessor would have to have known, too. And at least one other person in his administration. Six.

Trump wasn’t always the President of the United States, either. He used to be just some reality television star. So we can’t assume that only the very top of the upper echelons of intelligence would have dealt with Trump, or at least known about him. Let’s conservatively call this five. That makes 11.

Then, there is the paper trail. Someone has to be helping Trump hide money he receives for his services, and that person works with at least one other person knowledgable about Trump’s shady finance dealings. 13.

Then there are the secretaries, assistants, chefs, entertainers, waitstaff, concierges, drivers, bodyguards. Let’s be conservative and count two of each, shall we? That’s 16, plus 13, giving us 29. Let’s say Trump’s been a Russian agent for 30 years.

But still, not a great chance.

Those conspiracies were intended to stay secret. They were planned and carried out to the best of many highly capable people’s abilities. But they just couldn’t do it. People talk.