Save the planet; bring your own jet: Elite celebrity eco-warriors like Leonardo DiCaprio, Prince Harry, and Katy Perry fly off to Italy to discuss climate change. And hypocrisy. 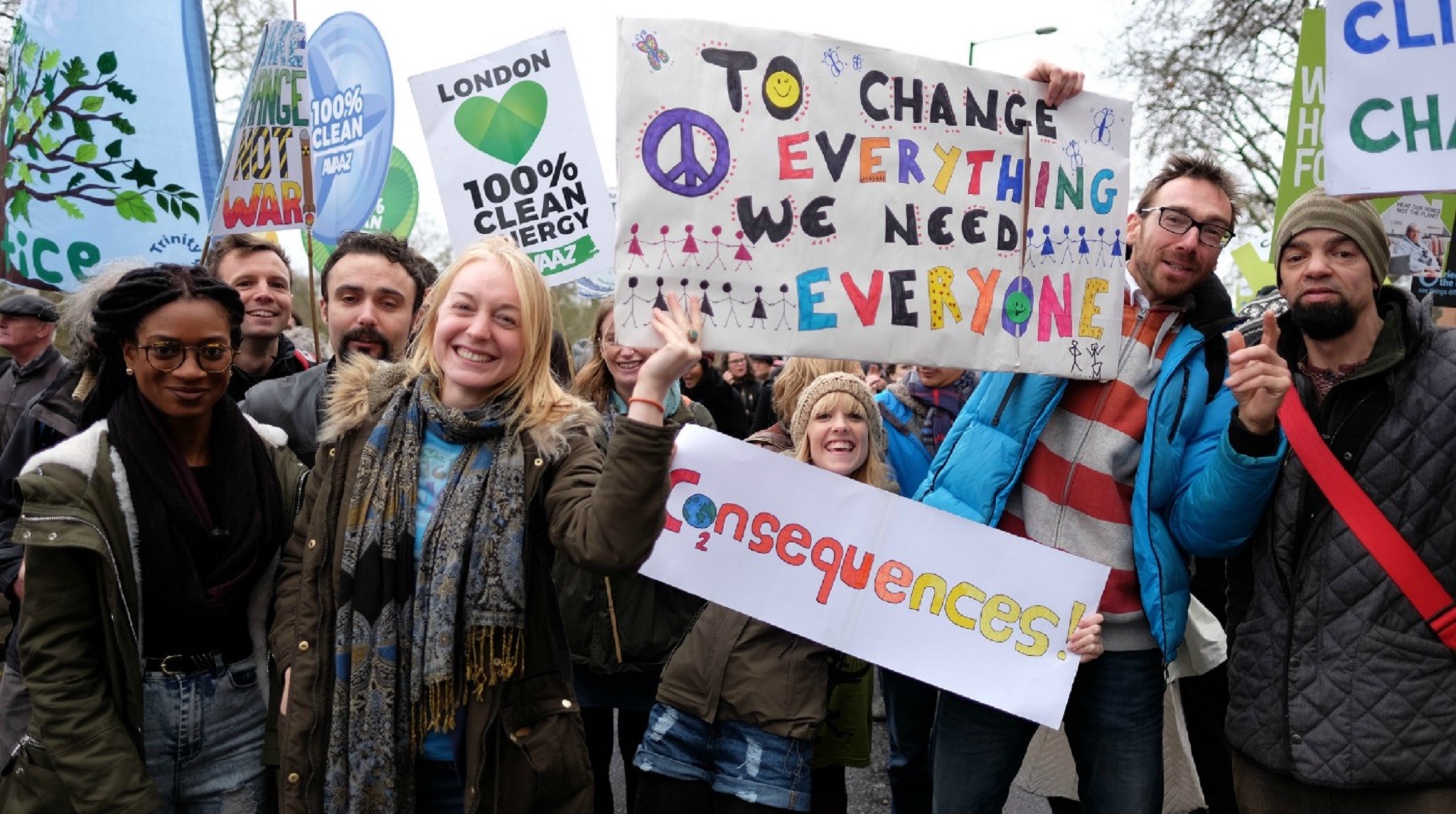 These people were taking part in the world’s biggest weekend of climate change activism in modern history. The march in London on 29 November was held as part of a series of rallies worldwide prior to the Paris climate change talks. Activists want decisive action to limit the rise in average global temperature to 2 degrees Celsius above pre-industrial levels. (photo: Alisdare Hickson)

If this is how those committed to saving the Earth act, the Earth is in more serious trouble than we thought.

Right around the time the luxury yachts the Aquarius, the EOS, the Rising Sun, the Infinity and the Ulysses were sailing into a picturesque Italian harbor, and no fewer than 114 private jets were landing in Italian airports in advance of the upcoming annual Google Camp event, people noticed something odd.

A bit of a discrepancy, you might say. How could super-wealthy people who claim to care about the environment possibly be so dense?

You’ll have to excuse them, they are deeply out of touch. Some of them haven’t so much as rubbed elbows with the unwashed masses for years. They don’t fly coach, they don’t use public transportation, and they certainly don’t carpool.

The wealthiest celebrities don’t know how much a gallon of milk costs, or a loaf of bread; they don’t do dairy, or processed carbohydrates. Their private chefs prepare all their perfectly proportioned meals.

Electricity costs skyrocketing in summer, especially for those suffering under the throes of the well-meaning but wildly improbable Green New Deal, aren’t a part of their daily lives; they have an army of accountants, fund managers, assistants, and bundlers who handle nearly every aspect of what could be considered the “normal”, inescapable, constraints of life.

That is, death and taxes.

“Taxes” as defined as all the endless, thankless, painful, expensive tasks that are their own sort of purgatory for everyone in the working class; bills, food, rent, healthcare, clothing, childcare, tuition- financial burden infinity.

Death? You can believe that the ultra wealthy in the U.S. and around the world have their best people on it at this very moment. The only thing this uber-privileged class of people don’t like about the obscene comforts they enjoy is that it must someday end when they die

Wealthy celebrities don’t know what’s in season; they don’t know how much the average parent pays for childcare in America. Paris Hilton, Hilton hotel heiress and one-time reality television star, was famously clueless about Wal-Mart; she thought they sold walls.

Who can blame her? Never having set a single $2,750-sandal clad foot near one in her life, what else would she assume about a place called Wal-Mart.

However, attachment to the lavish comforts of outrageous fortune is something of a handicap as it pertains to saving the planet.

Those very, very bad habits of we in wealthy nations:

Bad habits like too much cheap meat that has meant massive animal agriculture operations with devastating effects on the environment, not to mention massive profiteering from animals fed growth hormones and dosed with antibiotics.

Bad habits like pawning off our mountains of plastic and trash onto poorer countries, and countries with fewer regulations about how waste is disposed, which is exactly why they could do it more cheaply.

Bad habits like a demand for cheap clothing leading to exploitative corporate practices by wealthy companies around the world.

Perhaps the worst thing about excess is the way it paves for others who must inevitably follow.

Poorer countries want to be more like the wealthier ones. Emerging markets like India and China, and their ever-growing middle class, want the same things people in America want; see all of the above.

Worse still, some emerging markets are still in a Wild Western free-for-all phase of post-industrial, pre-regulatory mania that repeats the very worst sins of America post-industrial revolution times three. China and India have over a billion people each.

As in what the Potomac River or the Hudson must have looked like when companies were at complete liberty to dump anything they liked, no byproduct or chemical too caustic, into the waterways at will. Times three.

The problem with celebrity moralizing can be boiled down to something simple: Good for Thee But Not for Me

They are suffering from a delusion Tom Wolfe called “radical chic”. It’s a charade that reads more like a Great Gatsbyesque party with an environmentalism theme than the workings of Greenpeace. It is an echo of the worst kind of ecowashing: