Attack on Law and Order

It is time for Democratic Party leaders to condemn Antifa violence. 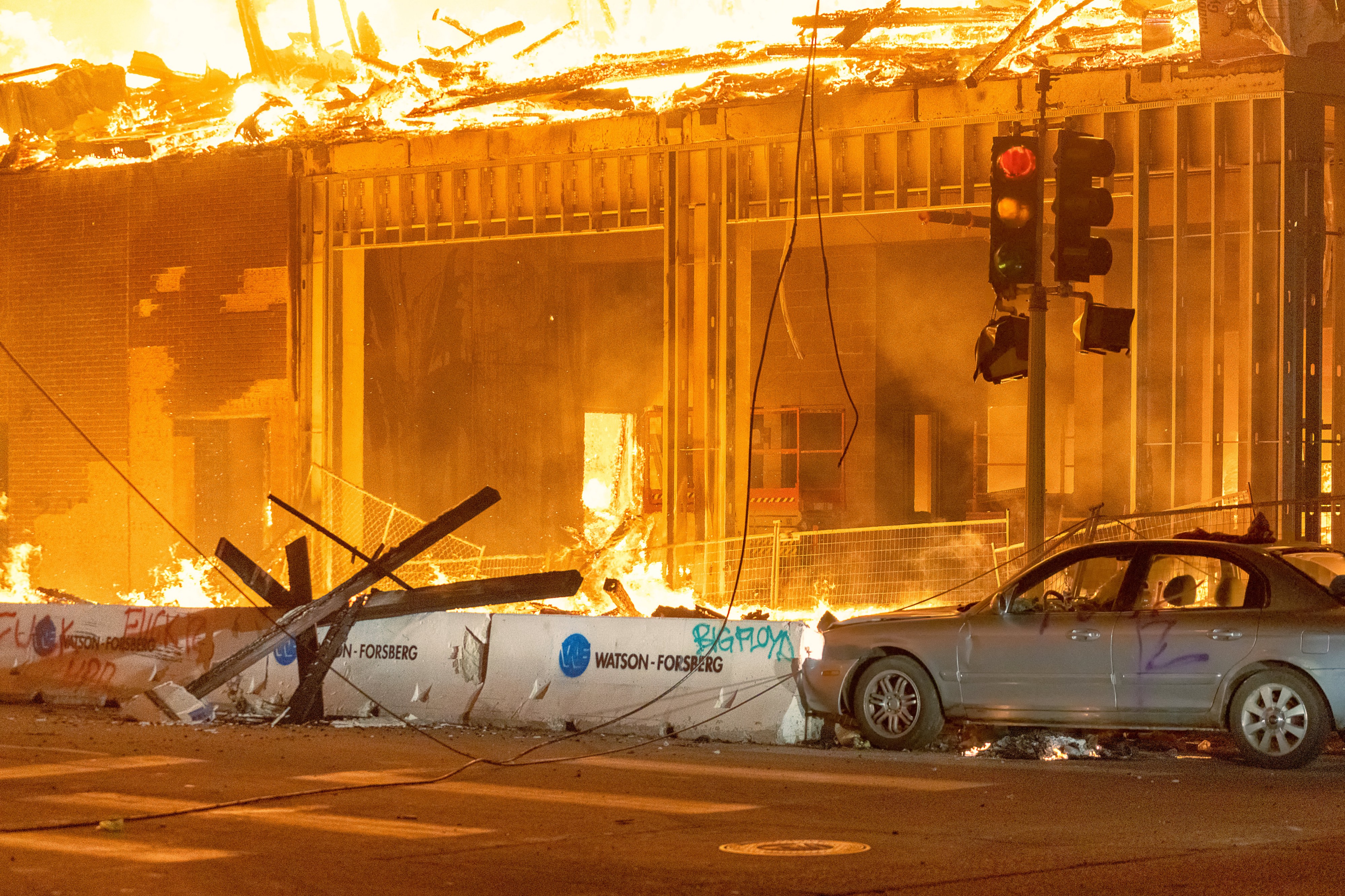 6-story development under construction on fire in South Minneapolis. Unrest over the May 25th death of George Floyd. May 28, 2020. (photo: Chad Davis)

Voting Democrats like law and order, too; to say nothing of the crucial swing voters, Independents, Libertarians and Green Party members. Democrats need every vote to win in November.

Efforts to reform policing in America cannot coincide with a breakdown of law and order.

The sharp rise in violence in several major cities, the uptick in highly-publicized instances of rioting, looting, arson and vandalism: These things are not making efforts to reform policing in America any easier.

In fact, this trend is badly hurting serious efforts to reform police departments around the country. The goodwill and new converts generated by the peaceful mass protests over the death of George Floyd have been frittered away by a tiny minority bent on lawlessness.

Condemning the tiny minority of violent perpetrators is something conservative politicians, and even Donald Trump, have had no trouble whatsoever in doing. The same cannot be said for their fellow elected Democrats.

From Rep. Alexandria Ocasio-Cortez’s callous dismissal of the violence as hungry people stealing bread to former Vice President Joe Biden’s deafening silence on the matter; Democrats have done nothing to quell the violence in all these many weeks.

Democrats may think this is helping the Democratic cause; it’s not.

The anger of some Black Americans, who have watched the righteousness of the Black Lives Matter protests which took place in the wake of the death of George Floyd devolve into violence and chaos, is understandable. That the largely White Antifa contingents in Portland and Seattle have figured most prominently in some of the worst and most well-publicized incidents is an indictment of the progressive far left.

That Democratic leaders have offered no guidance, no calls for peace in the streets, is also an indictment.

Watching African-American police officers being shouted down by White activists, pelted with dangerous projectiles and fireworks by violent protestors, injured and bloodied on the job is not softening the public towards defunding the police.

The silence, and worse, the apparent complicity, with which some of the most prominent and high-profile Democratic politicians have met these developments is somewhat mystifying.

“Joe Biden is an empty suit being hijacked by extremists on the left,” said Leo Terrell, a prominent African-American Civil Rights attorney said recently. He also took exception to Rep. Alexandria Ocasio-Cortez’s dismissal of the surge in violent crime as “people stealing bread,” so as not to go hungry.

Yet the people in AOC’s district are suffering.

“I think we’ve crossed a tipping point on many levels in terms of taking tools away from the police that maybe these last two months it’s just a completely difference situation where it’s a toxic environment.” — NYPD Police Commissioner Dermot Shea. July 16, 2020.

The violence, disguised as protest, is sapping momentum from the movement. It is also distracting from the main goals of the efforts.

The current movement to reform policing is not about installing anarchy. It isn’t about tearing down the government, or taking over a six-block radius, or burning down a courthouse.

It is about reallocating the vast resources currently dedicated to the militarization of America’s law enforcement into social services like mental health care, addiction treatment programs and domestic violence intervention programs and education.

These kinds of social services are designed to reduce the number of incidents to which police officers must respond, giving them more time to deal with investigating violent crime, theft and trafficking. These proposed policy changes are a pure win: A win for the community, for mentally ill people who need help, for people addicted to drugs who need treatment, for the chronically homeless.

These proposed changes are also a win for police departments.

There is a distinct benefit to reducing the burden placed on police departments. In places like Seattle, law enforcement authorities have been reduced to arresting the same mentally ill or drug addicted homeless people who commit crimes over and over.

Some people have been through the system hundreds of times. Police departments feel helpless in dealing with such cases and would happily cede them to a more-qualified authority- when theres is one.

Calling these efforts, “defunding” is certainly a mistake. Ignoring the upsurge in crime would be a bigger one. It is time for Democrats in leadership to condemn this phenomenon.

Respected leaders like House Speaker Nancy Pelosi, Joe Biden and AOC, could plead for calm, reminding everyone that Democrats have an election to win in November. And every vote counts.

The upsurge in violence, coupled with calls to “defund the police!” might spell disaster for Democrats at the ballot box. Public opinion has not been moved into the “defund” camp overnight. Activists and lobbyists for change have a great deal more work to do.

Violence will only make their work that much harder.