As the Peaceful Protest Narrative Crumbles

“When you commit arson with an accelerant in an attempt to burn down a building that is occupied by people who you have intentionally trapped inside, you are not demonstrating, you are attempting to commit murder.” 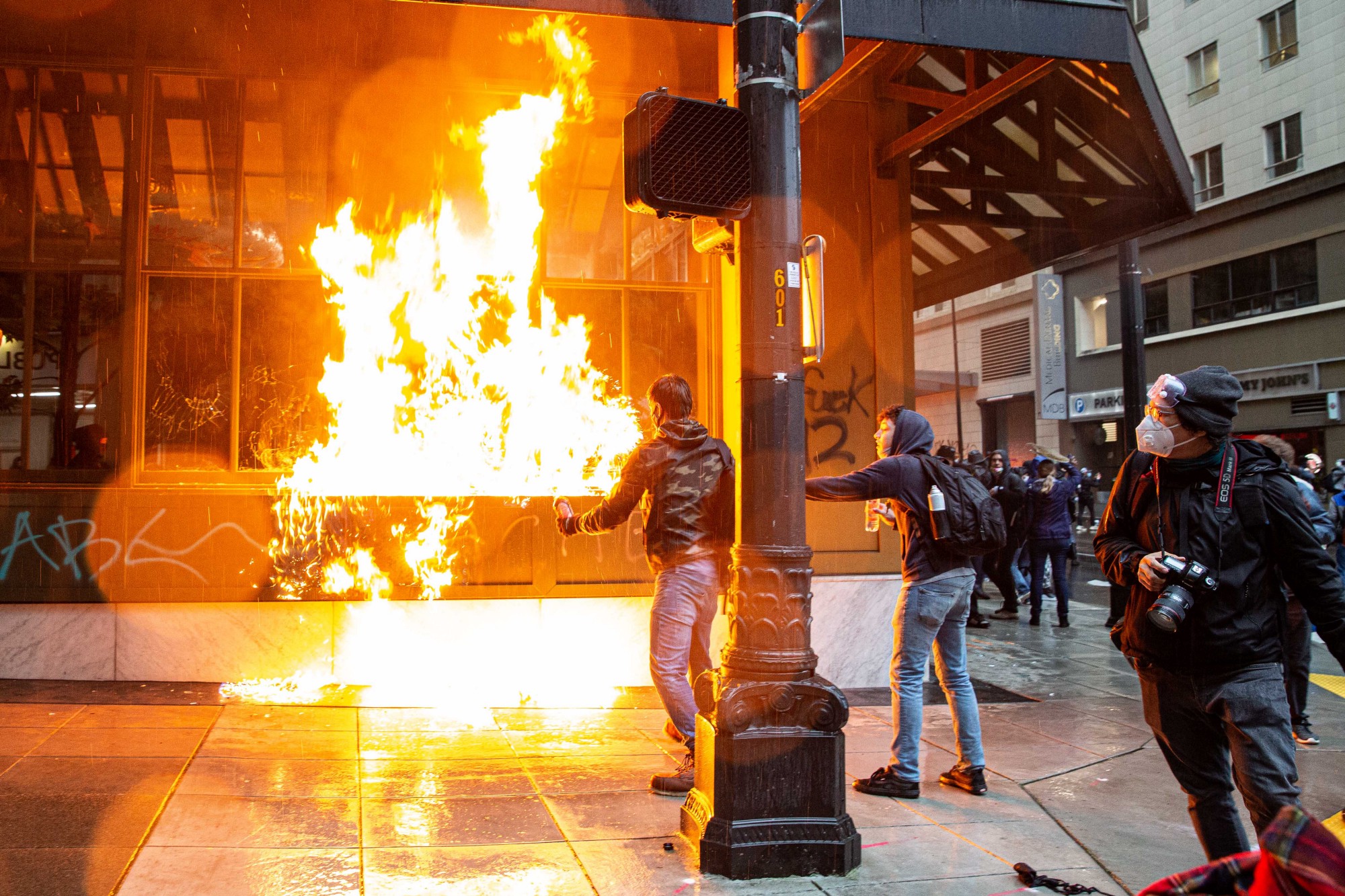 Protesters took to the streets of Seattle, WA to march in response to the death of George Floyd, a black man who was killed while being taken into custody by police in Minneapolis, Minnesota. May 30, 2020. (photo: Kelly Kline)

In an interview on, “Life, Liberty and Levin,” Sunday, Attorney General William Barr sat down with Fox News host Mark Levin to discuss the civil unrest in America today.

The interview came nearly two weeks after the House Judiciary Committee hearing in which Democratic lawmakers accused Barr of doing, “Trump’s bidding,” by intervening in high-profile cases and sending federal officers into cities like Portland.

Attorney General Barr has repeatedly denied these claims and maintained that he was following the rule of law, and prioritizing safety in U.S. cities- many of which have experienced an upswing in violent crime and waves of protests, some violent, in recent weeks.

Attorney General Barr and Mark Levin discussed the Black Lives Matter movement, as well as the related protests and riots sweeping across the nation. Barr drew parallels between the nationwide riots organized by antifa and a, “new form of guerrilla warfare.”

“The way the guerrilla…hides out among the people as a fish in the ocean…what they do is they are essentially shielding themselves or shrouding themselves in First Amendment activity,” he explained.

“They go into the demonstrations, which are exercising First Amendment activity, and they insinuate themselves in there to shield themselves. That’s where they swim. And what they do is they hijack these demonstrations and they provoke violence.”

While members of the organization known as, “Antifa,” describe themselves as “antifascist,” Barr claims this is a stance in name only.

“They are a revolutionary group that is interested in some form of socialism, communism. They’re essentially Bolsheviks. Their tactics are fascistic,” according to Attorney General Barr.

Barr claimed that the death of George Floyd caused the police to be unfairly demonized, leading to fewer officers in specific cities.

“The fact is, generally speaking, we have superb police in this country,” Barr said. “There will be some instances of excessive force, but by and large, it’s an excellent police force. And if they’re going to be demonized like this, they’re not going to work in these cities.”

AG Barr argued that the group’s radical elements are reflective of the Democratic Party’s far-left shift in recent years. Barr told Levin that the shift began the day Trump won in 2016, “and from that point forward, there’s been the resistance.”

“They were trying to impeach him from day one. They have done everything they can. They have shredded the norms of our system to do what they can to drive him from office or to debilitate his administration. and I think it’s because of the desire for power that the left wants.” Barr told Levin. “They want to run people’s lives so they can design utopia for all of us… and it’s the lust for power. And they weren’t expecting Trump’s victory. And it outrages them.”

While it may have once been easy to dismiss Barr as partisan, he seems to have been right all along about violence in U.S. cities, as the liberal Mayors of those cities are coming to realize and recognize publicly.

Barr has criticized the media’s coverage during the protests, saying the media was pushing their own, “narratives,” instead of reporting facts accurately.

According to Barr, “the corporations that are in the media business,” have become, “extremely monolithic,” and are wedded in many ways to the Democratic Party.

Later in the interview, Barr told Levin he believes, “all Black lives matter,” and the concept should not be solely about keeping African-Americans safe from physical harm.

“I believe Black lives matter, but I believe all Black lives matter. I also believe that it’s not just a matter of protecting their safety from physical harm, it’s also providing economic opportunity, which this administration has done. It’s also giving them a meaningful education that allows them to seize that opportunity,” Barr said.

Barr went on to discuss systemic racism and pointed to the, “best example” being the education system,” — a system he says is consistently failing inner-city youth. He suggested school choice, a policy endorsed by Trump, as one solution to the problem.

The Washington Post covered the interview and titled their piece, “Their tactics are fascistic’: Barr slams Black Lives Matter, accuses the left of ‘tearing down the system.’”

“Despite Barr’s claims, there have been no arrests or solid proof connecting antifa to violence at Black Lives Matter protests,” The Washington Post’s Fact Checker reported in June. “The far-right boogaloo movement, meanwhile, has been tied to a murder and several bomb plots aimed at escalating violence,” Washington Post reporter Jaclyn Peiser wrote.

Levin responded to the article, specifically this paragraph, in a series of Tweets, exposing the, “shocking lie.”

“Not only is the evidence everywhere, but notice the Post doesn’t even attempt to find out for itself; instead, this reporter cites its paper’s fact-checker,” Levin wrote.

And indeed, the coordinated effort by major media outlets to downplay the outbreaks of violence, theft, and destruction that has accompanied many of the BLM protests, is crumbling by the day.

Portland Mayor Ted Wheeler joined in one of the protests a few weeks ago, describing the gathering as a peaceful demonstration. Like other Democratic political leaders, Wheeler decried the presence of Federal law enforcement officers, accusing them, and Donald Trump, of intentionally inciting violence in Portland.

Mayor Ted Wheeler seems to have a change of heart. Echoing AG Bill Barr in his recent hearing on Capitol Hill, Wheeler had this to say to, “protestors,” in Portland after the events of last week:

“When you commit arson with an accelerant in an attempt to burn down a building that is occupied by people who you have intentionally trapped inside, you are not demonstrating, you are attempting to commit murder.”

Wheeler isn’t the only prominent Democrat willing to join Republicans in admitting the protests have spiraled into lawlessness and mayhem.

Mayor Jenny Durkan of Seattle, after defending protestors who cordoned off six city blocks into a, “Capitol Hill Autonomous Zone,” and calling it a, “Summer of Love,” changed her tune after protestors showed up at her home.

City officials, including Mayor Lori Lightfoot and Cook County State’s Attorney Kim Foxx, have been anxious to blame others for the coordinated looting effort. Witnesses described moving trucks being filled with stolen merchandise from high-end retailers in one of the most prestigious shopping districts in the country.

“To our residents, I want to make sure we’re doing everything we can to restore your homes and businesses. And to those who engage in that criminal behavior, let’s be clear, we are coming for you.” — Mayor Lori Lightfoot, August 10, 2020.

As Lightfoot, Wheeler, and Durkan attempt to assuage angry voters, business owners, and taxpayers- and in the case of Mayor Jenny Durkan, deal with civil lawsuits brought on behalf of Seattle businesses left abandoned by public officials in the CHOP- the narrative of the, “peaceful protest,” is crumbling in the face of overwhelming evidence to the contrary.

And news consumers, who need now more than ever to be able to trust their news sources, are left again wondering what to believe in the face of a mainstream media conglomerate increasingly exposing its bias and agenda.