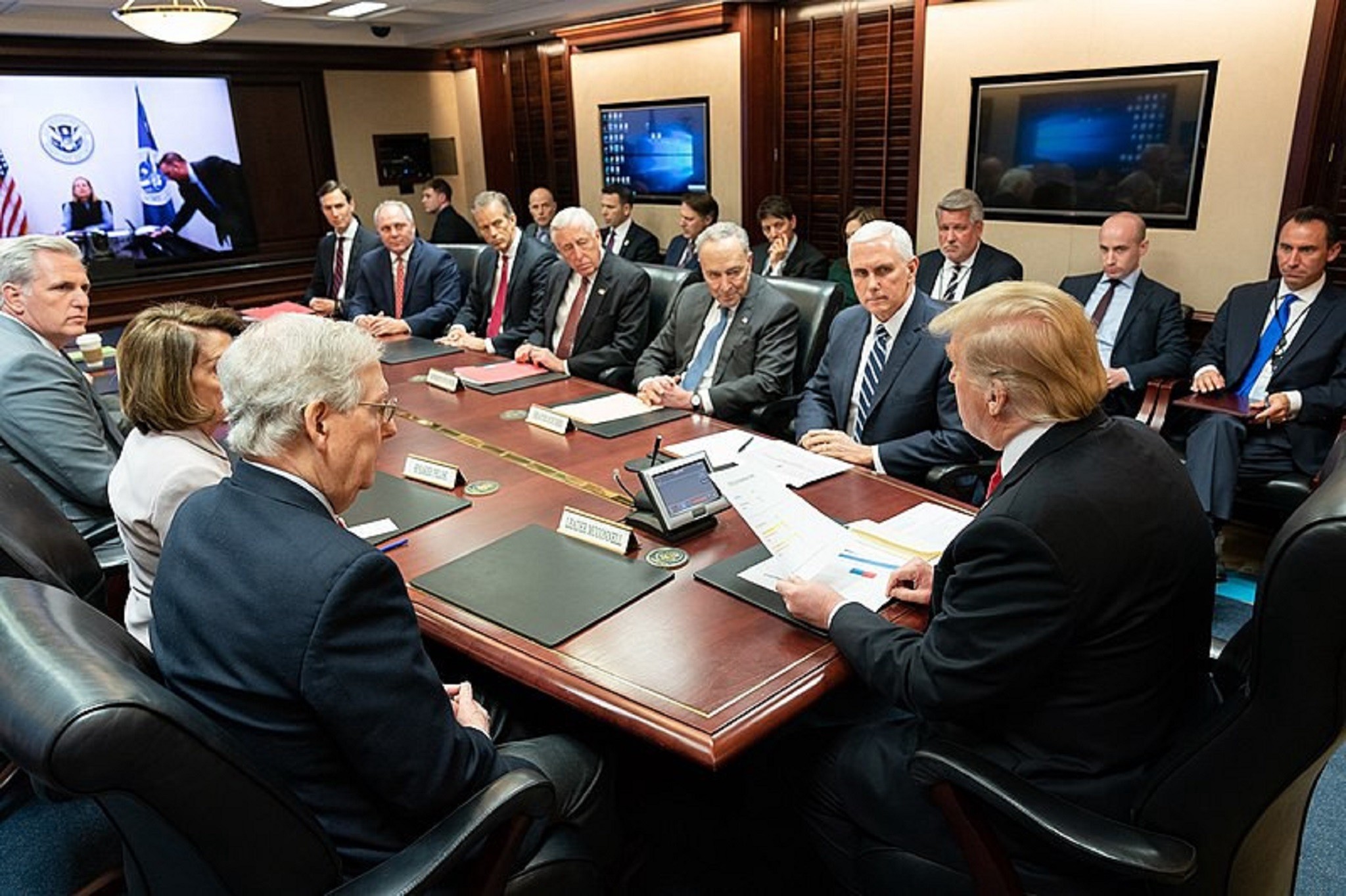 Last week, Nancy Pelosi was not backing down: Democrats would #STOP TRUMP from giving the State of the Union address; #STOPTRUMP from getting even one penny for border security; #STOPTRUMP from ending the government shutdown. Indefinitely. 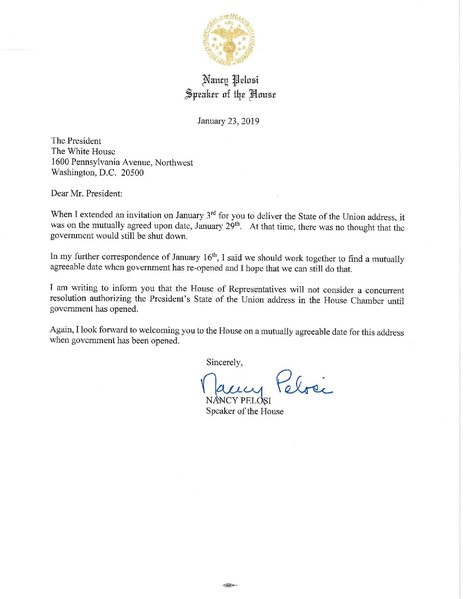 This week, as Democrats have clearly indicated, nothing has changed.

Further shutdowns are a weapon they are quite willing to wield against the American people in order to #STOPTRUMP.

Nancy Pelosi and House Democrats seem unwilling, or unable, to accomplish anything beyond obstructing Trump in any way possible, by fair means or foul. It is to be supposed that in the unlikely event a Trump impeachment succeeds, #STOPPENCE will be the next and only order of business for Democrats.

There are more Republicans where they came from, you know.

What are the American people to do in the meantime, while their legislators are at constant stalemate because, #2020?

For a party that wants the government to do everything for us- from educating us, to caring for our children, to caring for us when we are old and sick- Democrats certainly expect Americans to go without a working government for a long time.

This does not reflect well on government largesse. Democrats are asking voters to consider policies that will bring even more vital services, like healthcare, under the purview of government while that same governemnt witholds people’s paychecks over politics.

What else will they withhold, the next time they aren’t getting anywhere or want to send a message to political rivals?

A minority of hardcore, very liberal Democratic supporters might like it. The rest of the 95% of America, less so. President Trump’s approval rating might be suffering, but Nancy Pelosi has officially made herself the most hated politician in America.

Beyond #STOPTRUMP, what do elected Democrats plan to do? Like it or not, he is the sitting President. Pelosi herself is working hard to delay and diffuse impeachment talk until after the Mueller investigation concludes.

So what do #STOPTRUMP Democrats plan to do in the meantime?

Bearing in mind, President Trump doesn’t always need to be stopped; anyone who says otherwise just doesn’t like him.

Getting out of Afghanistan diplomatically seems like something liberals could warm to, considering how long the U.S. has been mired in that particular conflict.

Trump is right about Venezuela, too. The Venezuelan people are speaking, protesting en masse against the latest incarnation of Hugo Chavez and the failed policies that have driven the entire country to actual starvation.

Trump is supporting the opposition party leader, a man with the support of the people and erstwhile President of the Venezuelan National Assembly. If Trump was against him, Democrats would be for him.

The FIRST STEP Act helped begin to right the wrongs of the American justice system, a federal law requiring U.S. hospitals to post comprehensive price lists online in 2019 is a great step towards lowering the cost of health care in America.

The new North American trade deal was pretty great, too. Trump even donated $100,000 of his salary to alcoholism research this week. Surely that is at least ok?

Did Democrats fail the American people by letting the FIRST STEP Act pass? Should House Democrats have fought tooth and nail to stop hospital prices from becoming public knowledge?

Is Trump so evil, even his donation should be sent back by any self-respecting Democrat?

Why Block the State of the Union Address?

Speaker Pelosi’s decision to block the President from delivering the State of the Union from the House chamber sent a troubling message to voters, and not the one she wanted to send.

While certain elitists and insiders may decry the SOTU speech as obsolete and passé, they also mention in passing the 46 million people who watched the SOTU in 2018.

If Trump is such a deplorable mess, why not let him address the nation? The more often the better. He’s not exactly known for his reticence anyway. It’s not like he is maintaining radio silence.

Why not let him address the nation as planned, assure the public that their elected leaders are working to end the shutdown? Unless you don’t want the public reassured…

If you are right, the facts can speak for themselves: You don’t need a convoluted narrative to sell it. You don’t need to insert Dynasty-level dramatic plot lines and ratchet up the fervor by leaving people without their paychecks while you refuse to negotiate even one penny for border security during what is obviously a humanitarian crisis at the U.S. southern border.

The SOTU is a vital tradition in America, giving citizens the chance to consider the direction of the country, and an opportunity for everyone to listen to the sitting president’s perspective on the upcoming year.

This attempt to deny Trump this opportunity accomplished nothing.

The SOTU is still set to take place next week, with the Democrats choosing defeated Georgia gubernatorial candidate Stacy Abrams to give the rebuttal.

Which is what Democrats should have been focused on from the beginning: The rebuttal.

If House Democrats are so certain that what they are doing, and refusing to do, is right, why would they have wanted to delay such a primetime opportunity to address the American public?

What was Pelosi afraid Trump might say? Did Democrats have nothing they were burning to say on their own behalf?

And why was Abrams chosen for the high-profile rebuttal? Stacey Abrams will be the first person to rebut a State of the Union without holding public office. Many Democratic voters think Abrams should have been the rightful governor, accusing Republicans of electioneering and stealing the election from Abrams.

Is putting Abrams front and center an attempt to paint Republicans as unscrupulous? A bid for voter sympathy?

That might work if Democrats themselves weren’t being accused of stealing elections and election fraud all the time.

Looking at you, Broward County Florida.

Why not put one of the many Democratic rising stars or 2020 presidential hopefuls on display, show a more forward-thinking attitude?

They Have the Guns But We Have the Numbers

Democrats have an important choice to make in the upcoming weeks and months: Does their loyalty lie with the Democrat left-wing extremists who want to turn the Democratic Party into the Democratic Socialist Party or with the constitutional democracy of the U.S and the voters who participate in it.

House Democrats, including Pelosi, could easily have negotiated on border security, backing the same measures they have so often, and on record, supported in the past.

That they did not, were indeed unwilling to even negotiate publicly or privately, even with the future of Dreamers on the line, says something. “Not one dime for border security,” says it again. Prolonging the shutdown and delaying the SOTU address says it even louder.

The Democratic Party can only agree on one thing: #STOPTRUMP.

What Democrats plan to do with the rest of their Republican colleagues, the other members of the Republican Party, plus the 60 million or so Republicans who voted in the 2016 election, is anyone’s guess.