Anarchy in the U.S.A.

A state of emergency has been declared in Portland for the first time and members of the Portland PD are being deputized as federal officers. 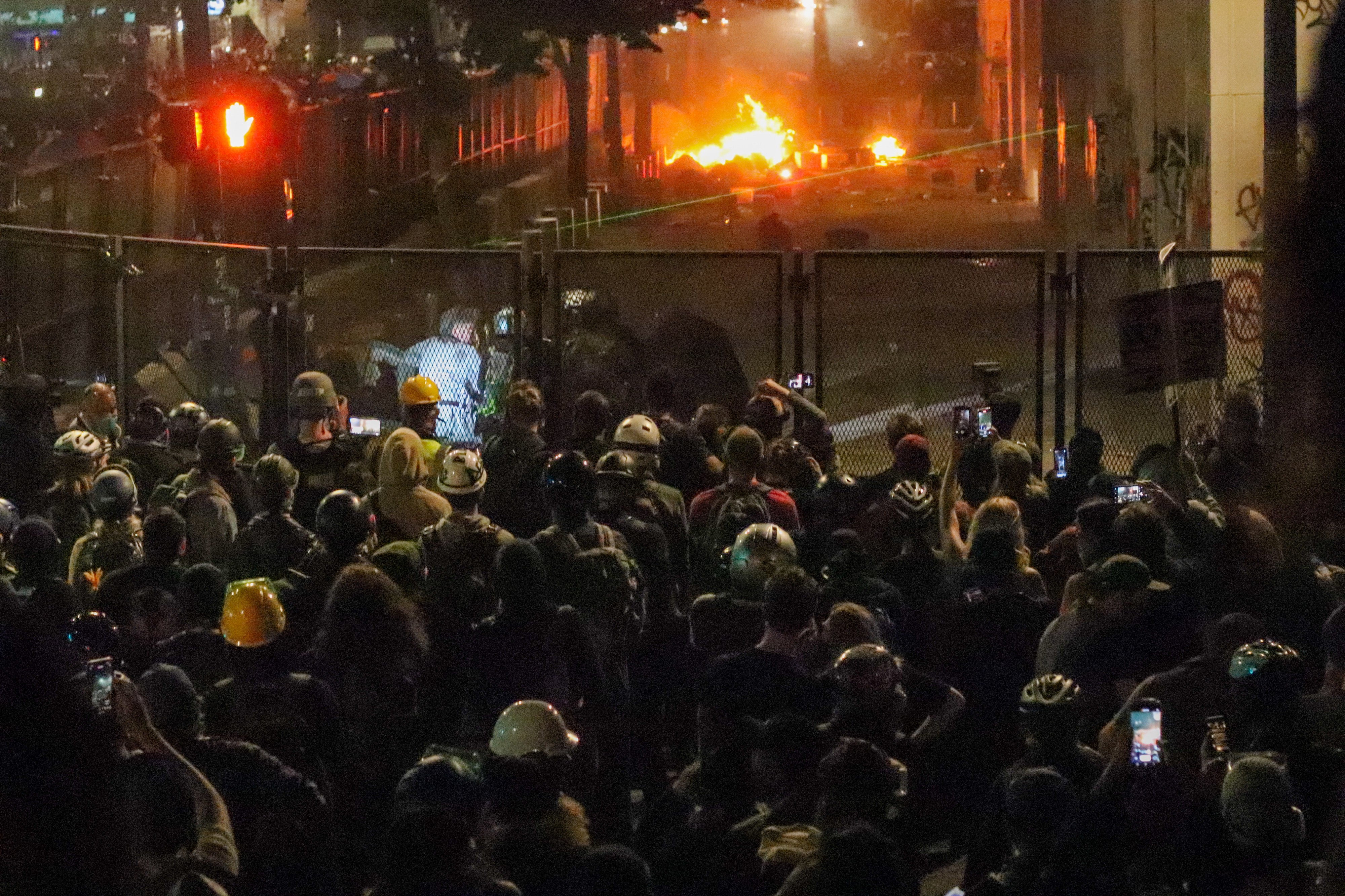 The U.S. Department of Justice has identified three U.S. cities in which “anarchy, violence, and destruction” have caused long-term, widespread damage to people, property and the rule of law over the past few months.

Elected officials in Portland, Seattle, and New York City have “permitted violence and destruction of property to persist and have refused to undertake reasonable measures to counteract criminal activities,” according to the Justice Department.

“When state and local leaders impede their own law enforcement officers and agencies from doing their jobs, it endangers innocent citizens who deserve to be protected, including those who are trying to peacefully assemble and protest,” according to a statement released Monday by Attorney General William Barr.

“We cannot allow federal tax dollars to be wasted when the safety of the citizenry hangs in the balance,” Barr added. “It is my hope that the cities identified by the Department of Justice today will reverse course and become serious about performing the basic function of government and start protecting their own citizens.”

The document notes the criteria used to evaluate each city, including.

The D.O.J. also noted that district attorneys in Manhattan, Brooklyn, Queens and the Bronx have declined to prosecute charges related to or arising from the protests. In the midst of the unrest, the New York City Council cut $1 billion from the NYPD’s fiscal year 2021 budget.

Portland made the list over its more than 100 consecutive nights of protests marred by “vandalism, chaos, and even killing,” the statement reads.

Shootings and violent crime in Portland are increasing at an alarming rate. In spite of that, the Portland City Council voted to cut $15 million from the police bureau, including cuts to the Gun Violence Reduction team, which investigates shootings, and from the law enforcement team responsible for responding to emergency incidents.

Seattle joined both Portland and NYC on the “anarchist” list for permitting protestors to seize six square blocks of the city’s Capitol Hill neighborhood, naming their “Capital Hill Autonomous Zone” (CHAZ), which was later renamed the “Capitol Hill Occupied Protest” (CHOP). Two teenagers were shot and killed in the zone. Law enforcement and first responders were impeded from entering the territory. The Seattle Police Department was even ordered to abandon their precinct within the CHOP.

This recent move by U.S. Attorney William Barr is the Trump Administration’s latest attempt to crack down on cities where protests for racial injustice have turned into violent riots. President Trump issued a memo earlier this month directing the D.O.J. to identify jurisdictions which were not enforcing the law.

“My Administration will not allow Federal tax dollars to fund cities that allow themselves to deteriorate into lawless zones. To ensure that Federal funds are neither unduly wasted nor spent in a manner that directly violates our Government’s promise to protect life, liberty, and property, it is imperative that the Federal Government review the use of Federal funds by jurisdictions that permit anarchy, violence, and destruction in America’s cities,” the president said in the memo.

“It is also critical to ensure that Federal grants are used effectively, to safeguard taxpayer dollars entrusted to the Federal Government for the benefit of the American people.”

New York City Mayor Bill de Blasio dismissed the charges that NYC has become a haven for lawlessness during a news conference on Monday.

“I was out in Elmhurst Queens this morning, I saw peace, tranquility, I saw people going about their business, people excited that it’s the first day of school — I saw anything but anarchy. This is just another one of President Trump’s games,” de Blasio said.

“It’s thoroughly political. It’s part of his campaign strategy. It makes no sense. It’s not based on the facts in the least. It’s insulting to the people of New York City. And his effort to withhold our funds is unconstitutional,” de Blasio added.

The Mayors of Portland, Seattle and New York released a joint statement on Monday, calling the D.O.J.’s characterization of their cities “ thoroughly political and unconstitutional.”

“The President is playing cheap political games with Congressionally directed funds,” the joint statement read. “What the Trump Administration is engaging in now is more of what we’ve seen all along: shirking responsibility and placing blame elsewhere to cover its failure.”

“I understand the politics, but when you try to manipulate and distort government agencies to play politics, which is what the Trump administration has done from day one … this is more of the same,” New York Governor Andrew Cuomo said during a conference call with reporters, according to NBC News.

“The president can’t supersede the law and say I’m going to make those funds basically discretionary funds, which is what he would have to do. If they actually do this, we will challenge it legally, and they will lose once again, because we’ve seen this play before,” Cuomo added.

Though the Mayors of Portland, Seattle and New York undoubtably would like shift the focus to Donald Trump, there is demonstrable proof that their dereliction of duty is endangering lives and livelihoods in their cities.

“A Violent August in N.Y.C,” ran a blistering headline in the New York Times recently; “Shootings Double and Murders are Up by 50%“

In addition to the indisputable proof of the rising crime rates in each of these cities, there has been a dramatic rise in gun ownership over the past few months.

There is also the immutable fact that looting and arson has damaged or destroyed businesses in each of these cities. Soon, insurance companies will be making public information detailing exactly how much they have paid out in claims due to looting.

Businesses are abandoning Portland and Seattle at exponential rates. People are fleeing New York City, many who say they are leaving for good.

The Democrats who run the city and state governments in each of these cities seem utterly flummoxed as to how to stop the violence. Governor Kate Brown of Oregon has declared a state of emergency in Portland for the first time since the nightly protests began. Portland law enforcement officers are being deputized as federal officers in anticipation of more violence in the nights to come.

It might be time for the mayors of Portland, Seattle and New York, and the governors of Oregon, Washington, and California to admit they need federal assistance, even if it means accepting that assistance from Donald Trump.