Against the strenuous objections of Democrats, Republicans confirmed their third Supreme Court Justice in as many years. 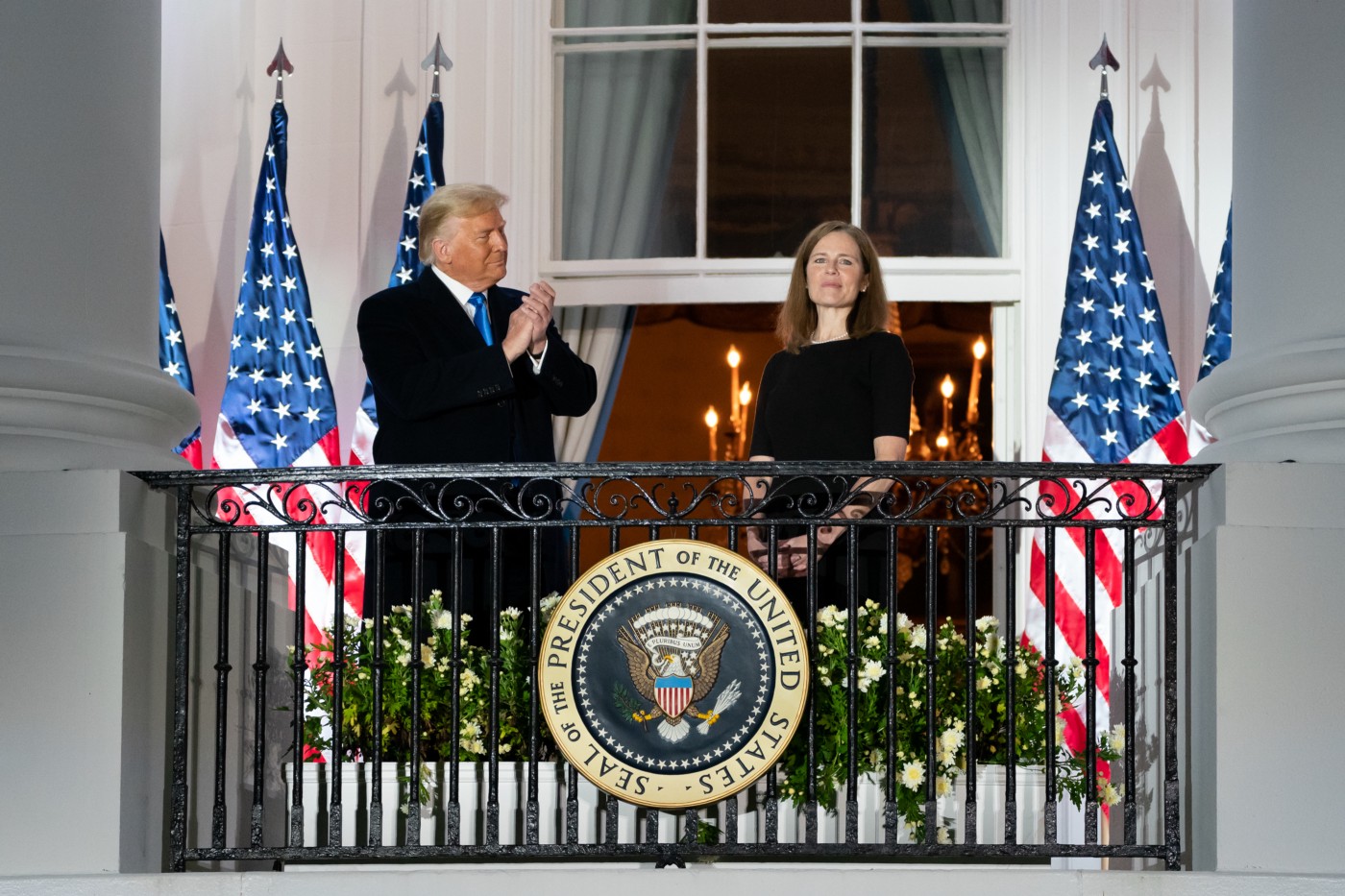 President Donald Trump opened the proceedings Monday night with an effusive speech praising Barrett, saying “She is one of our nation’s most brilliant legal scholars and she will make an outstanding Justice on the highest court in our land. Justice Barrett’s oath will be administered by the Court’s longest serving member currently on the bench; a man whose allegiance to the law has earned him the respect and the gratitude of all Americans: Justice Clarence Thomas.”

Supreme Court justices are required to take two oaths before they are able to execute the duties of their appointed office. After taking the constitutional oath on Monday night, Barrett took the judicial oath on Tuesday in a private ceremony at the Supreme Court.

After the president’s speech Monday night, Barrett followed with remarks of her own: “The confirmation process has made ever clearer to me one of the fundamental differences between the federal judiciary and the United States Senate. And perhaps the most acute is the role of policy preferences.”

“It is the job of a judge to resist her policy preferences,” Justice Barrett continued. “It would be a dereliction of duty for her to give in to them. Federal judges don’t stand for election, thus they have no basis for claiming that their preferences reflect those of the people. This separation of duty from political preference is what makes the judiciary distinct among the three branches of government.”

Democrats did not respond lightly to the confirmation of Justice Barrett and immediately threatened to pack the courts. Speaker of the House Nancy Pelosi claimed that Barrett’s seat was an “usurped Supreme Court seat,” and that President Trump had manipulated the Supreme Court, even though the entire process of appointing Justice Barrett was constitutional.

“Should we expand the court? Let’s take a look and see,” Pelosi said. “And that relates to the nine district courts, maybe we need more district courts as well. And one other thing we need- we need for these justices to disclose their holdings.”

Rep. Rashida Tlaib, (D-MI), wrote on Twitter “We are going to take back the White House & Senate next week with a resounding mandate from the people to fight back against Trump’s illegitimately stacked judiciary. We must expand the Court if we’re serious about the transformational change the people are crying out for.”

“Remember that Republicans have lost 6 of the last 7 popular votes, but have appointed 6 of the last 9 justices,” Omar continued, seemingly lacking substantial knowledge about the U.S. Constitution and Supreme Court. “By expanding the court we fix this broken system and have the court better represent the values of the American people.”

Democratic vice presidential nominee Sen. Kamala Harris (D-CA) delivered a stark warning to her Republican colleagues, in which she said “we won’t forget this.”

“Today Republicans denied the will of the American people by confirming a Supreme Court justice through an illegitimate process — all in their effort to gut the Affordable Care Act and strip health care from millions with pre-existing conditions,” she wrote in a tweet Monday night.

Senate Majority Leader Mitch McConnell disagrees with these claims: “Our colleagues cannot point to a single Senate rule that’s been broken. They made one false claim about committee procedure which the parliamentarian dismissed. The process comports entirely with the Constitution.”

McConnell went on to add during remarks at the Barrett confirmation hearing that Republicans, “have no doubt if the shoe was on the other foot in 2016, Democrats would have done the same thing.”

“Why?” Sen. McConnell asked, “Because they had the elections that made those decisions possible. The reason we were able to make the decision we did in 2016 is because we had become the majority in 2014.”

“The reason we were able to do what we did in 2016, 2018, and 2020 is because we had the majority. No rules were broken whatsoever. So all of these outlandish claims are utterly absurd, and the louder they scream, the more inaccurate they are,” said Sen. McConnell.

“Mitch McConnell sent out a statement tonight and as I said at the opening, the very last dying wish of RBG was that her vacancy not be filled until the new president takes office in January,” Rep. Cortez said. “That was her dying wish.”

However, Rep. Cortez and the rest of the many Democrats who emphasized Ginsburg’s “dying wish,” clearly do not respect all of Ginsburg’s wishes.

“Nine seems to be a good number. It’s been that way for a long time,” Justice Ginsburg said in an interview with NPR in July of 2019. “I think it was a bad idea when President Franklin Roosevelt tried to pack the court.”

A recent poll revealed that only about 27 percent of the public support the extreme proposal of partisan court packing. Justice Ruth Bader Ginsburg herself opposed the idea of court packing, warning that it “would make the court look partisan.”

“If anything would make the court look partisan,” Ginsburg said during the July 2019 NPR interview, “it would be that — one side saying, ‘When we’re in power, we’re going to enlarge the number of judges, so we would have more people who would vote the way we want them to.’”

For his part, Republican Senate Leader Mitch McConnell was perhaps correct to remind Democrats in the House of Representatives, including Speaker Nancy Pelosi, and Democratic Senators, that authority to confirm Supreme Court Justices flows from the U.S. Constitution, not feelings or wishes.

“Our democratic colleagues keep repeating the word illegitimate as if repetition would make it true. We’re a constitutional republic. Legitimacy does not flow from from their feelings. Legitimacy is not the result of how they feel about it.” — Sen. Mitch McConnell. October 26, 2020.