Who is Tony Bobulinski?

After making serious public accusations against the Biden family, will there be any consequences for Hunter Biden’s former business partner? 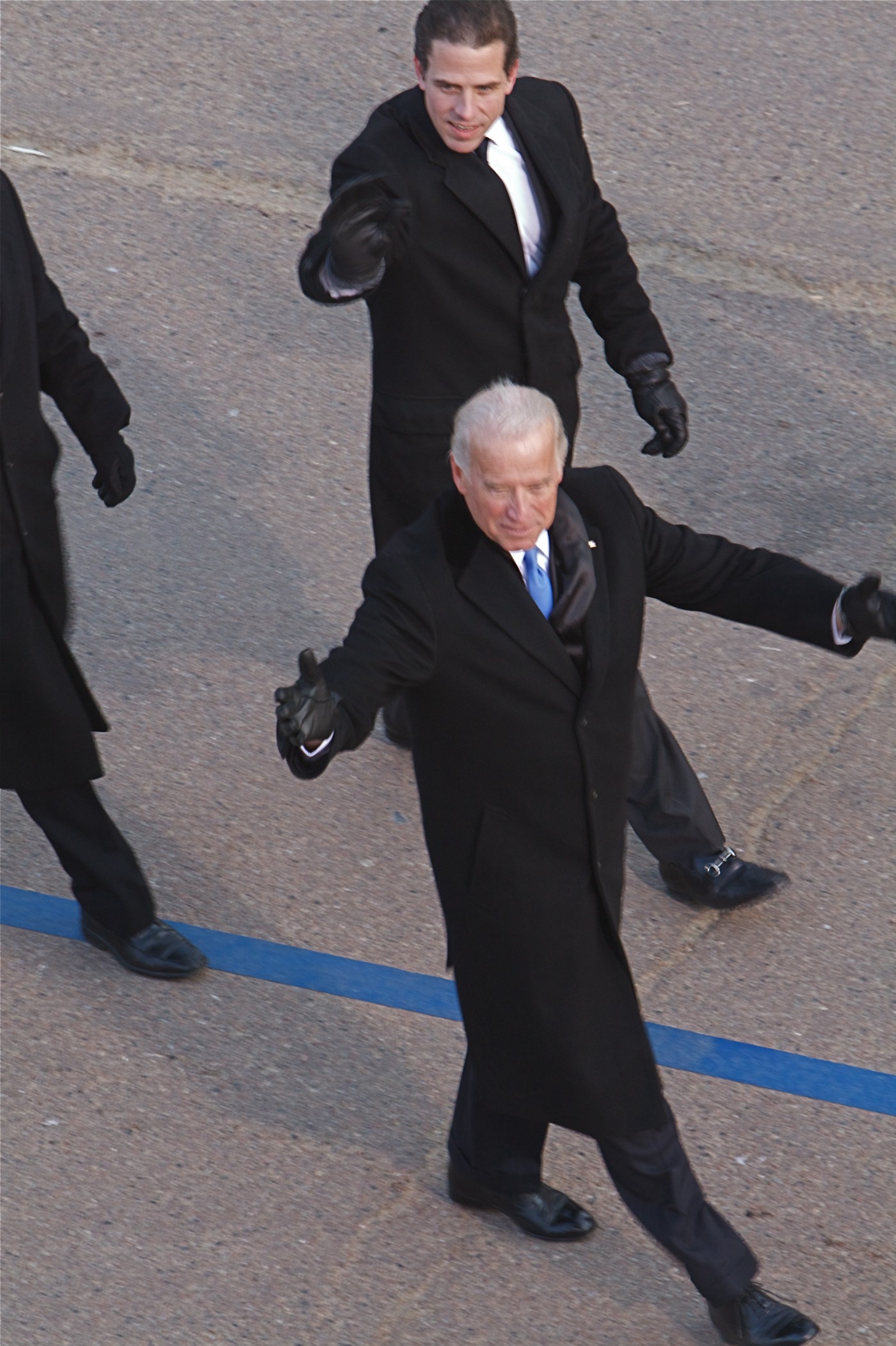 Then Vice President Joe Biden and his son Hunter in the 2009 inaugural parade of Barack Obama. January 20, 2009. (photo: Ben Stanfield)

Lost in the general kerfuffle of the election, and especially in the frenetic final days leading up to Election Day, was the news that Hunter Biden’s alleged ex-business partner, Tony Bobulinski, had turned on the Biden family and was prepared to go public.

One week before Election Day, influential Fox News Host Tucker Carlson interviewed Anthony Bobulinski, a former Naval officer. During the interview, Bobulinski claimed to have met with Joe Biden himself to discuss China and that Biden is indeed “the big guy” referenced in an email about a proposed equity split in a deal with the now-bankrupt CEFC China Energy Co.

The email included a discussion of “remuneration packages” for six people in a business deal with the Chinese energy firm. The email appeared to identify Hunter Biden as “Chair / Vice Chair depending on agreement with CEFC.”

It also includes a note that “Hunter has some office expectations he will elaborate.” A proposed equity split references “20” for “H” and “10 held by H for the big guy?”

The email was allegedly obtained by the New York Post, and while Facebook and Twitter took steps to limit the spread of the story in the days leading up to the election, questions still remain about why such a story was in circulation at such a critical time. Those responsible for deliberately spreading such false and misleading information, if indeed it is false, should be prosecuted. At the very least, the person who publicly accused Joe Biden of taking Chinese kickbacks in the days leading up to a very important election, deserves a bit more scrutiny.

During the Tucker Carlson interview, Bobulinski produced eyewitness accounts and documentation, including a tape recording, texts, emails and business records, as supporting evidence that Joe Biden and his family were involved in foreign business dealings with China. Bobulinski said he “want[s] to simplify this for the American people as much as I can,” and outlined the compensation for Joe Biden that was held by Hunter Biden via deals with CCP-connected companies.

Bobulinski said Jim Biden, Joe Biden’s brother, ended up obtaining a 20 percent stake in Oneida Holdings after the 2017 email said he’d only get 10.

Bobulinski also claimed to have met with Joe Biden in Los Angeles, despite various statements from Joe Biden that he had no involvement with or knowledge of his son’s overseas business dealings. Bobulinski called Biden’s denials a “blatant lie” and added that he did not initiate the meeting with the former Vice President.

“I didn’t request to meet Joe,” Bobulinski told Carlson. “They requested that I meet with Joe… They were putting their entire family legacy on the line. They knew exactly what they were doing. They were dealing with a Chinese-owned enterprise.”

“Why on 10:38 on the night of May 2 would Joe Biden take time out of his schedule to take time with me, behind a column so people could not see us, to have a discussion with his family and my family and business at a very high level?” he continued.

Joe Biden and his campaign have mostly mainly maintained radio silence on this topic, but have repeatedly denied having knowledge of or being involved in his family’s overseas business dealings.

“I have not taken a penny from any foreign source ever in my life,” Joe Biden said during the last presidential debate. “We learned that this president paid 50 times the tax in China as a secret bank account with China, does business in China, and in fact, is talking about me taking money? I have not taken a single penny from any country, whatsoever, ever, number one.”

Biden was right that Trump had a bank account with China, but it wasn’t a secret. Trump said he was looking to do business in China which is why he opened the account, but closed his account in 2015, before entering office.

“Joe Biden has never even considered being involved in business with his family, nor in any overseas business whatsoever,” Biden campaign spokesman Andrew Bates told Fox News. “He has never held stock in any such business arrangements nor has any family member or any other person ever held stock for him.”

However, during the Tucker Carlson interview Bobulinski said Joe Biden’s brother, Jim Biden, dismissed concerns in 2017 that Joe Biden’s alleged ties to the business deals could put his future presidential campaign at risk.

Bobulinski told Carlson that while speaking to Jim in a cabana at the Peninsula Hotel, he “remember[s] saying, ‘How are you guys getting away with this?’ ‘Aren’t you concerned?’”

He then says Jim Biden laughed and answered, “Plausible deniability.”

Bobulinski also said he spoke with Rob Walker, a former partner and former official in the Bill Clinton and George W. Bush administrations, and demanded that Rep. Adam Schiff (D-CA) to retract his claim that The Post’s recent reporting on Hunter Biden’s emails was part of a Russian-orchestrated “smear on Joe Biden.”

Carlson then played a portion of an audio recording that Bobulinski said was part of the conversation.

“If he doesn’t come out, on record, I am providing the facts,” Bobulinski said.

“Ah, Tony, you’re just going to bury all of us, man,” Walker replied.

Many news outlets have gone to bat for Biden, refusing to report on the story or alluding to it only vaguely as Russian disinformation. The media’s attempts to stay away from this topic may have been well meant, but now that the election is behind us, the situation bears further scrutiny.

Were the allegations, and Hunter Biden’s laptop, a Russian disinformation campaign? If so, what was Bobulinski’s role in the conspiracy? Surely there are legal penalties for publicly slandering a presidential candidate, at best; certainly there are legal penalties for cooperating in a Russian disinformation campaign to interfere with an election, at worst.

Wall Street Journal columnist Bill McGurn said the story has been covered up by the media and social media companies. McGurn published an op-ed in which he wrote: “At the moment, the hard questions Mr. Biden is avoiding are about the lucrative deals his son made with politically connected Chinese and Ukrainian businesses, sometimes while riding alongside his father in Air Force 2.”

“This past week, one of Hunter Biden’s former business partners, Anthony Bobulinski, accused the former vice president of lying when he said he never discussed his son’s overseas business dealings — and the Hunter Biden story became a Joe Biden story,” McGurn continued.

“And not only the press. When the New York Post published texts and emails from the laptop, along with an explanation of how they came into the Post’s possession, Twitter and Facebook ran interference by suppressing the story — and the Post — on their platforms,” McGurn added.

Whether or not these actions helped the Biden campaign, who can say. But the time for ignoring this story has passed. With Joe Biden successfully installed as President Elect, provided he is successfully installed, the Hunter Biden laptop story, and more specifically those perpetuating it, deserve a much closer look from the press.

The Hunter Biden story isn’t going away; nor should it. Accountability in the form of legal consequences will help discourage any such disinformation campaigns against future political candidates.