Progressives are about to prove it. 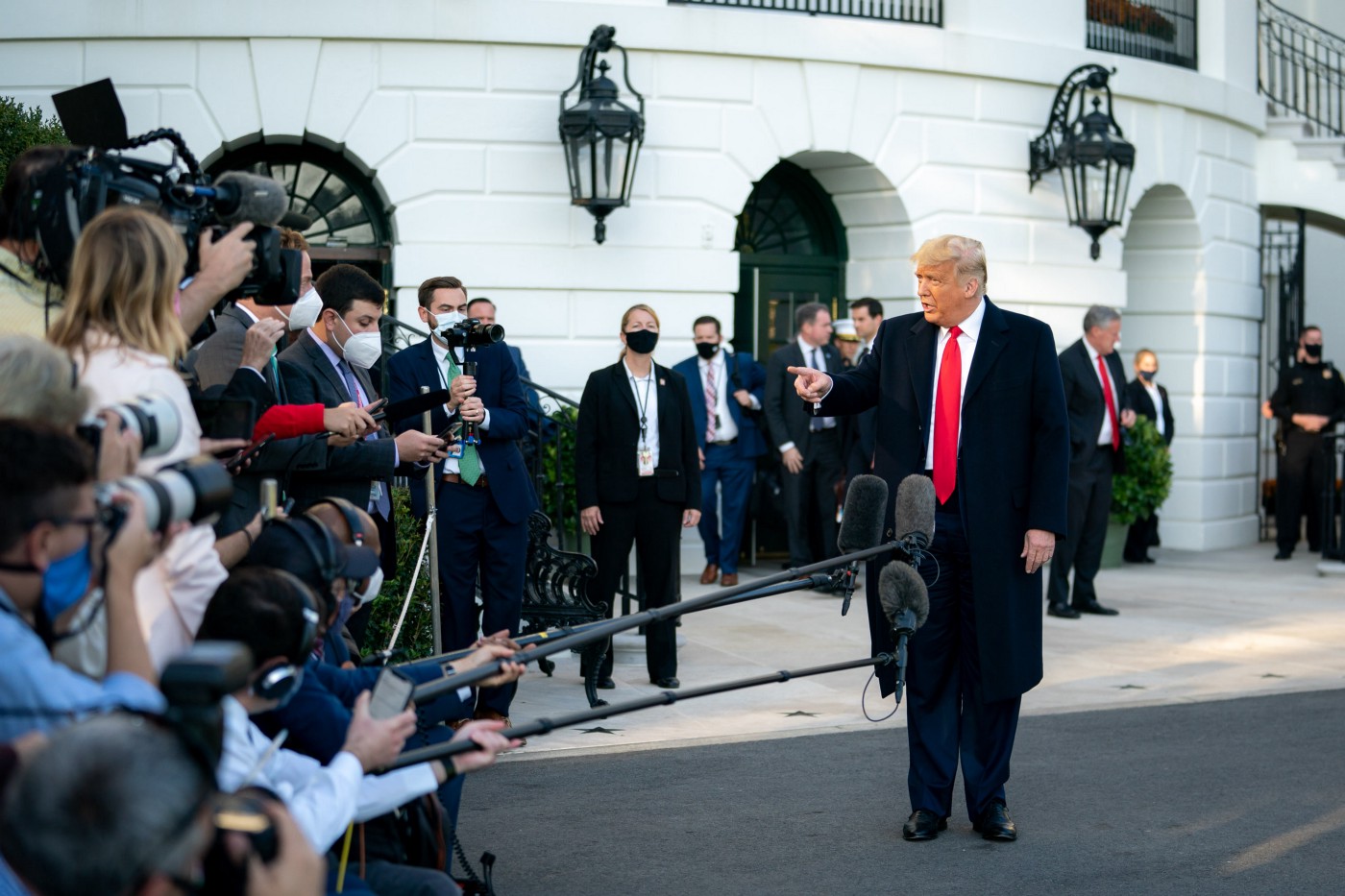 President Donald J. Trump talks with reporters outside the South Portico entrance of the White House Wednesday, Oct. 21, 2020, prior to boarding Marine One en route to Joint Base Andrews, Md. to begin his trip to North Carolina. (Official White House Photo by Tia Dufour)

Trump won the debate last night against Joe Biden. By the end of the day tomorrow, or by next week at the latest, we will have certain proof.

No, it won’t come in the form of approval ratings, which are nebulous at best and not much good at proving anything. The proof of Trump’s debate win won’t be found in the efforts to which many members of the media will now go to shield Joe Biden and spin his performance into something masterful and commanding.

Those things will be evidence Trump won, but we will be seeing proof. Trump might have completely blown his first debate, like other incumbent presidents running for reelection before him, but Donald Trump trounced Joe Biden in the second round.

Popular sports writer and political commentator Jason Whitlock gave Trump some debate coaching at the White House this week. It appears to have worked because the embattled incumbent president put on a strong showing. He maintained his cool, for the most part. He challenged Biden relentlessly on the latter’s performance as Vice President as his voting record as a long-time Senator.

Joe Biden, on the other hand, often appeared confused, wrong-footed. Some of Biden’s answers were barely intelligible collections of words which are going to take the press some days to clarify to their own satisfaction.

Luckily, the press has had plenty of practice at this already: “What Joe Biden Was Trying to Say About the Green New Deal,” as patiently explained by left-leaning Vox; “What Biden Means When He Says ‘I am the Democratic Party,” translates another online media outlet equally sympathetic to Democrats.

During the second debate, Biden’s signature, politician’s-politician style fell flat. Biden’s constant refrains of “C’mon man” and “Here’s the deal” and “Let me be clear” were, as Trump rightly described them, the decades-old schtick of the career politician.

These verbal mannerisms almost seemed like mental placeholders for Biden. Looking straight into the camera, Biden, galvanized by his “Look, here’s the deal,” would sometimes launch into an articulate appeal. Other times, Biden coupled his signature intro phrases with obvious and maudlin appeals to sentiment which seemed manipulative.

“You reelect Donald Trump,” Joe Biden warned Americans in one such detour, “and you will reach over at night for your loved one and they won’t be there.” It was as if Joe Biden couldn’t help reminding us that he is still the same Joe Biden who told a room full of African-American voters in 2012 that Mitt Romney would “put ya’ll back in chains!” while reminding us that Donald Trump does not have the franchise on political campaign hyperbole.

“You’re making all these promises about what you will do: Why didn’t you do it during the 47 years you’ve been in office?” Trump asked Biden repeatedly during the debate.

On the subject of why the Obama/Biden administration passed no significant criminal justice reform, a sore spot for Biden, Biden’s plaintive excuse, “We had a Republican legislature,” wasn't the mic drop he no doubt hoped it would be.

Into the silence which followed Biden’s statement, Trump interjected a roundhouse:

“You have to talk them into it, Joe. I had a Democratic congress. I had to do some arm twisting but I still got it done.”

In addition to the weaknesses of that excuse, another of Biden’s attempts to shift blame was exceptionally ill-judged: “I was the Vice President; I wasn’t the President.”

Yes, Trump won the debate. But the proof of that won’t come from Trump himself, or Joe Biden, or the polls.

The proof will be in how the left treats the debate moderator over the next few days. If Joe Biden did indeed win the debate, there will be no no need to criticize her. If Donald Trump won the debate, however, and it looks to be helping Trump in the polls, the blue-checks on Twitter, and the press with them, are going to roast Kristen Welker.

She was way too easy on Donald Trump.

Rather than debating Trump herself, which other moderators have tried to do, or attempting to mediate between the two candidates, which has also failed, she behaved as a neutral moderator.

Still, and probably without meaning to, Kristen Welker helped boost Trump’s performance. Not only did she dare to broach the subject of Hunter Biden’s foreign business dealings, a place where George Stephanopoulos feared to tread during Biden’s recent town hall event, she gave Trump what was perhaps his biggest win of the night.

That Joe Biden authored the 1994 crime bill which has since sent tens of thousands, perhaps hundreds of thousands, of African-American men to prisons, is a matter of public record.

That Donald Trump should challenge Biden on this weak point, especially considering the FIRST STEP Act, should have been of no surprise to Joe Biden.

Yet, when Trump brought up Biden’s crime bill, and its impact on the Black community in the decades since, Biden denied it.

“That’s a lie,” Biden said, as moderator Kristen Welker segued easily into her next question. Unfortunately for Joe Biden, that next question happened to be an almost verbatim repetition of Trump’s accusation.

“Mr. Vice President Biden, considering your 1994 crime bill incarcerated tens of thousands of Black men in America…” she began. It was the coup de grâce, and that it came, not from Trump, but from moderator Kristen Welker is going to be what really chaps the left.

That former VP Joe Biden answered reasonably well, if not particularly articulately, is to his credit. Biden admitted the crime bill was a mistake, but added that it was a mistake all 100 U.S. Senators made at the time. Biden claimed to have been trying to fix it ever since.

Sadly, while this was perhaps the right thing to do in the larger sense, it put Biden in the position of admitting, on stage, that not only had he been disastrously wrong- but that he has been trying and failing to fix the mistake in the 23 years he spent in office between 1994 and 2016.

This morning, it’s been “Kristen Welker is the only true winner of the debate!” and “Kristen Welker, MVP!” But the dust hasn't really settled on last night yet.

Without meaning to, Kristen Welker helped Trump defeat Joe Biden in reasoned debate. Whether or not it helps Trump win on Election Day, we will know soon enough.

“By the way, so far I respect very much the way you’re handling this,” said President Trump to Welker at one point, late in the debate. Unfortunately for the moderator, as others on the left can attest, a compliment from Donald Trump is the kiss of death in certain progressive circles.

Hopefully the left will be able to resist the temptation to pin Biden’s loss of the debate on Kristen Welker. It would be the ultimate proof of Trump’s dominance in the second debate.

But the seeds are already sown. The Washington Post is purporting to be pleased with Welker today- but the comments section tells a different story. The same is true over at the New York Times. It may be only a matter of time before the tide of public opinion changes, first on Twitter, then in the mainstream press.

If conservatives are praising Kristen Welker- and they are- the left may not be able to resist the temptation to turn- once again- on a fellow progressive.

What the Inauguration of President Joe Biden Was Really Like Jan 26, 2021